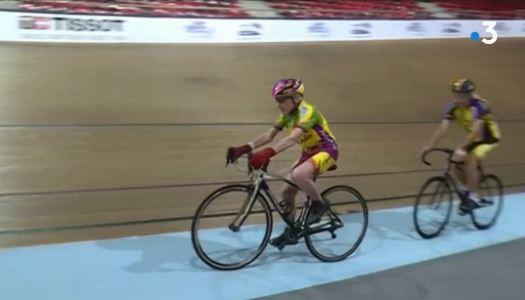 French centenarian spend an hour at Velodrome National on Friday - but UCI wouldn't sanction new record attempt due to health fears...
by Simon_MacMichael

French centenarian Robert Marchand has come out of retirement to ride the boards of the Velodrome National near Paris once again – a month shy of his 107th birthday.

Marchand, who turns 107 on 26 November, announced he was hanging up his wheels in January last year after setting a 105+ age group record of 22.547 kilometres for the Hour, created especially for him by the UCI.

But he was back on his bike to ride around the track at Saint-Quentin-en-Yvelines between 9am and 10am last Friday morning, but the UCI reportedly declined to ratify any new record attempt in case ill-health befell him.

According to a report on The Asian Age, the 106-year-old needed a little help getting on his bike but once under way pedalled around the track, followed by a support rider.

He was presented with a gold medal and a commemorative jersey afterwards, and said: Even at this age, you can do something.

“I try to do a little bit of exercise every day, even if it’s just 20 minutes.

“One mustn’t let oneself go soft. The day you just sit in your armchair and stop moving, you’re screwed.”

As to what lies behind his longevity, he added: “Use everything and abuse nothing.”

Born in 1911 Marchand, who lives in Mitry-Mory near Paris, took part in his first bike race more than 90 years ago – under an assumed name because he was too young to enter officially.

In a colourful life, he undertook jobs including being a gym instructor to the fire brigade in Paris, and a lumberjack in Canada.

He is an ambassador for the Ardéchoise sportive, taking part in the event since its debut in 1992 at the age of 79, and has a mountain pass – the Col Robert Marchand – named after him.