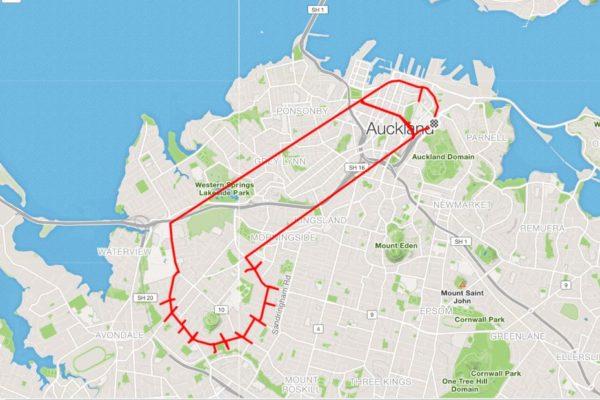 It may be rude – but it’s for a very good cause, tying in with prostate cancer awareness month
by Simon_MacMichael

Cyclists in New Zealand will undertake what is dubbed the ‘Big Cock Ride’ – and in doing so will be raising money for a prostate cancer charity.

The road was devised by Strava artist Carl Wells at the suggestion of his friend – and fellow, erm, member of the Auckland Philarmonia Orchestra – Tim, who survived a prostate cancer scare several years ago, reports Bike Auckland.

Since then, Tim has organised an event each year in aid of the Blue September prostate cancer awareness campaign, with a bike ride featuring for the first time alongside live music, beer and food.

The 30-kilometre, two-hour ride departs from Auckland’s Red Rabbit Café at 1pm on Saturday 29 September, and cyclists are asked to sign up through Strava or Facebook.

Carl says: “For artistic purposes, the actual route will differ very slightly from image above, as there is no straight line route through Grey Lynn.

“But, when using a GPS computer, if you pause it mid-ride and resume at a different location, the software (on Strava) draws a straight line between the two points.

“Hence the two straight lines in the ‘art’.  Between marking those points, we conveniently ride up the Nelson St protected bike lane, Lightpath, and the Northwestern Cycleway.

“On the return route, after completing the ‘nuts’, we come back on the NW cycleway again, and down the Grafton Gully. Tricks of the trade!”