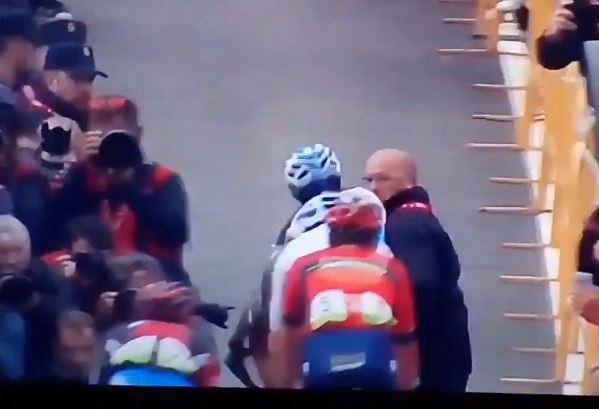 CPA president says: "Cycling is becoming a dangerous sport rather than improving"...
by Simon_MacMichael

Gianni Bugno, the president of the professional cyclists’ association (CPA) says that it is unacceptable that incidents such as the post finish line crash at the Vuelta yesterday that left Team Sky rider Dylan van Baarle with cuts and bruises continue to happen despite race organisers and the UCI promising to improve rider safety.

As van Baarle crossed the line yesterday after finishing second to Alexandre Geniez of AG2R La Mondiale, a race official was running away from the finish with his back towards the rider. Geniez was unable to avoid him and caught his elbow, with van Baarle coming down as a result.

Vuelta organisers have apologised for the incident, which happened less than a week after the down-draft from a helicopter hovering above the finish area of Stage 6 of the race blew crash barriers across the road, causing riders to crash including Julien Duval of AG2R La Mondiale, who needed stitches.

After yesterday’s incident, Bugno said: "It is not acceptable that after months of work of all the stakeholders to improve the safety at the races, we are still seeing episodes such as the fall at the arrival of the twelfth stage of the today's Vuelta.

"I am really tired of seeing this superficiality in applying the regulations set out in the Organiser Specifications. This lack of attention from the organisers demonstrates a total lack of respect towards us that have worked hard to improve the safety at the races and a total lack of consideration towards the riders.

“We are no longer willing to accept post apologies for foreseeable accidents,” Bugno continued. "The organisers must do their duty and must be penalized if they do not comply with the regulations. The UCI must intervene to verify that the regulations are respected. There are no extenuating circumstances.

“We are very disappointed by this latest lack of attention towards the riders and towards all the work we have been doing for months,” he added.

“Cycling is becoming a dangerous sport rather than improving and this time we are no longer willing to listen to those who do not respect the rules."