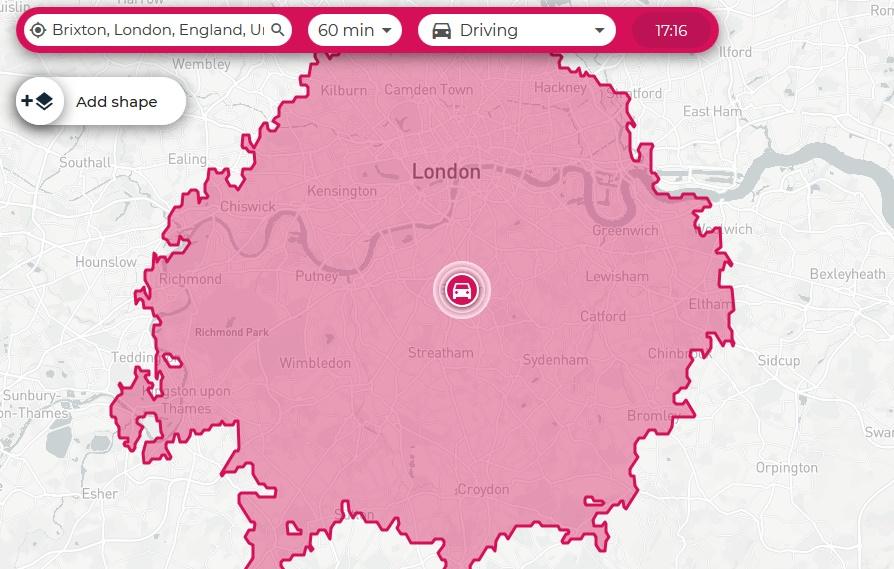 How far can you get in 15, 30, 45 minutes by different modes of transport?
by Alex Bowden

In Canada (and doubtless in several other countries) permanent signs on major roads inform you how long it’ll take you to get to the next town or city. This is the meaningful metric when getting from A to B, isn’t it? Time.

This is what has given rise to TravelTime – a search tool for anyone wanting to assess their journeys by travelling time rather than distance. It’s been created by British-based software firm iGeolise.

To use it, you say where you are, enter a travel time, choose a mode of transport and then it’ll display a map with a shaded area indicating where you can get to within that timeframe.

The app provides data for five modes of travel:

The standard search assumes the user is leaving the point of origin at the time of the search, but you can change that by pressing ‘Go’ on the front search page and clicking ‘Now’ on the search bar at the top right corner.

Where it gets fun is when you compare how much further you can get cycling than by using other forms of transport.

Here in Manchester, cycling fares well for 15-minute journeys. TravelTime reckons you can get further on a bike in that time than by any other form of transport.

It’s still better than public transport for half-hour journeys, but the pink splodge for driving is by far the largest for this timeframe.

It’s a similar story for my colleagues in Bath, but there aren’t too many trips in and around London that wouldn’t be completed quickest by bike. (In the City of London, average A road traffic speeds are now 7.6mph.)

Cyclist used their office in the heart of London as a reference point, but pick an area yourself and take a look. Even for 45-minute journeys, cycling opens up more destinations than cars or public transport.

If public transport maybe edges ahead for journeys of an hour and upwards, you’re not really going further by car than by bike until you hit about 90 minutes of travelling time.