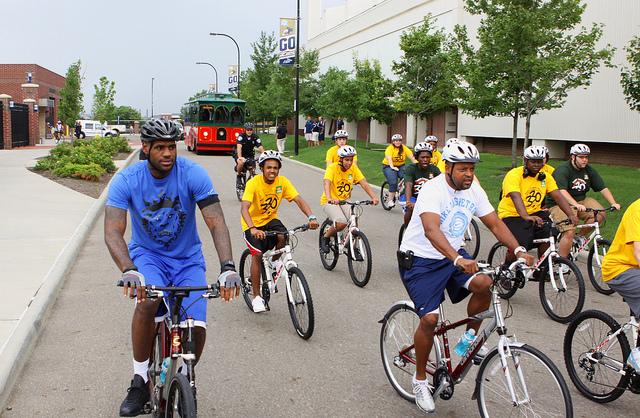 NBA star LeBron James has set up a school for at-risk kids in his home town of Akron, Ohio – and every student there is getting a bicycle on their first day.

The basketball legend yesterday opened the I Promise school, which focuses on students who have fallen behind their classmates in subjects such as reading and need additional academic support.

This year, approximately 240 third- and fourth-graders will attend the school, but by 2022 it will have some 1,000 students from grades one to eight, covering ages six to 14 years, reports the Huffington Post.

“I walked the same streets. I rode the same bikes on the streets that they ride on. I went through the same emotions. The good, the bad, the adversity.

The school will also provide pastoral care for children, support for their parents and will have a pantry stocked with food bank donations.

As for the bicycles?

James has said on a number of occasions that having a bike when he was growing up enabled him to get away from the more dangerous parts of the area he grew up in.

His LeBron James Family Foundation, through which he pledged $87 million in 2015 to set up the school, hosts an annual mass participation cycling events in Akron.

While playing for the Cleveland Cavaliers from 2003-10 and again from 2014-18 – in between, he had a spell with Miami Heat – the 33-year-old was regularly spotted cycling to and from games.

Presumably he’ll carry on that habit once he starts playing for the Lakers – and certainly, there’s been no shortage of advice to him on how to negotiate the streets of Los Angeles on two wheels, this article from Laist.com being just one example.