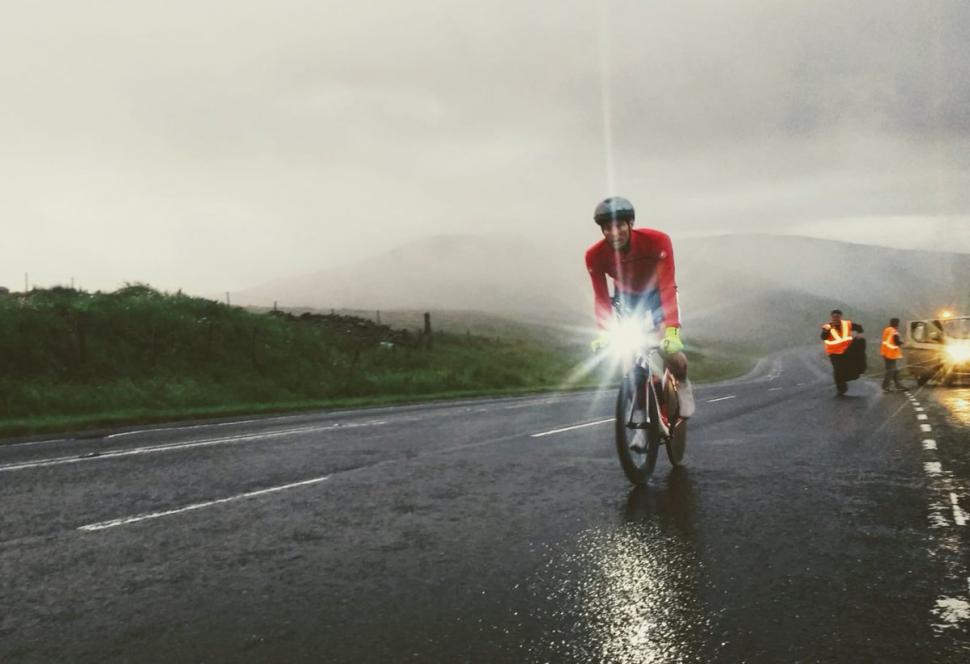 Michael Broadwith on Shap Summit (via endtoend2018 on Twitter)

Michael Broadwith has become just the tenth man to break the record for cycling from Land’s End to John O’Groats since George Mills, riding a penny farthing, made the first successful end-to-end attempt in 1886. The record now stands at 43 hours 25 minutes and 13 seconds - more than half an hour faster than the existing record.

Three-time national 24-hour champion Broadwith, well ahead of schedule as he broke the Road Records Association 24-hour record with 507.511 miles covered at an average speed of 21.1 miles an hour, had to contend with driving rain and an extremely painful neck later on.

Nevertheless the 40-year-old from Berkhamsted, Hertfordshire beat the existing record, set 17 years ago by Gethin Butler, who was among his supporters on the roadside including at Shap Summit, by more than half an hour.

Butler’s record of 44 hours 4 minutes and 19 seconds had stood for 17 years and while a number of riders have attempted to better it in the intervening years, they have been thwarted by factors including the weather, illness, injuries and mechanical problems and the sheer mental and physical fatigue that the challenge entails.

Arctic Tacx RT rider Broadwith, who had set out on his Specialized Shiv from Land’s End at 8am on Friday morning, seemed destined to follow them as the weather turned and the pain in his neck worsened, causing him to resort to propping his head up with one arm, the elbow resting on his aerobars.

Satarted on time for the @endtoend2018. 38 miles in now and on time. pic.twitter.com/lkmvDh5pz3

Speaking to Paul Jones of Cycling Time Trials after setting the new record, he said: “I managed to figure out some cock-eyed method where I was propping my head up with my arm on the aerobar rest like Rodin’s The Thinker. At least it meant I could descend under control and fairly fast.

“I had a stern talk to myself; ‘for God’s sake, chances like this come across once in a lifetime. If you don’t carry on you’ll think through this moment forever and wonder why you didn’t ride for another 20 minutes.”

But encouraged by his wife Helen, who was leading his support crew – which included their eight-month-old daughter – and helped by strangers who had heard of his plight and managed to source a neck brace in Inverness and get it to him – he arrived at John O’Groats after riding for 43 hours 25 minutes and 13 seconds.

John o’Groats. Record broken. After the most unbelievable 43 hours 25 minutes and 13 seconds. Thank you to the whole team for getting @24HourMaths in and, remarkably, ahead of his schedule.pic.twitter.com/RY5FBMJD8F

Describing the final stretch along the north-east coast of Scotland, he told Cycling Time Trials, which has a full report of the ride: “It was brutal. You’d climb up just so you could go back down again, I was questioning how many there were. I have thought about this for fifteen years and I have always imagined how amazing it must be to climb Berridale, the last brutal climb, knowing that you've got the record in the bag.

“Then I was actually doing it in the early hours of this morning and thinking 'bloody hell, this is me, in this moment, and I’m climbing up Berridale and I’m going to nail this record, my friend Des running alongside.

“I have to remember it because it is a perfect moment in life where I’m actually living the moment that I wanted to live in incredible intensity,” he added.