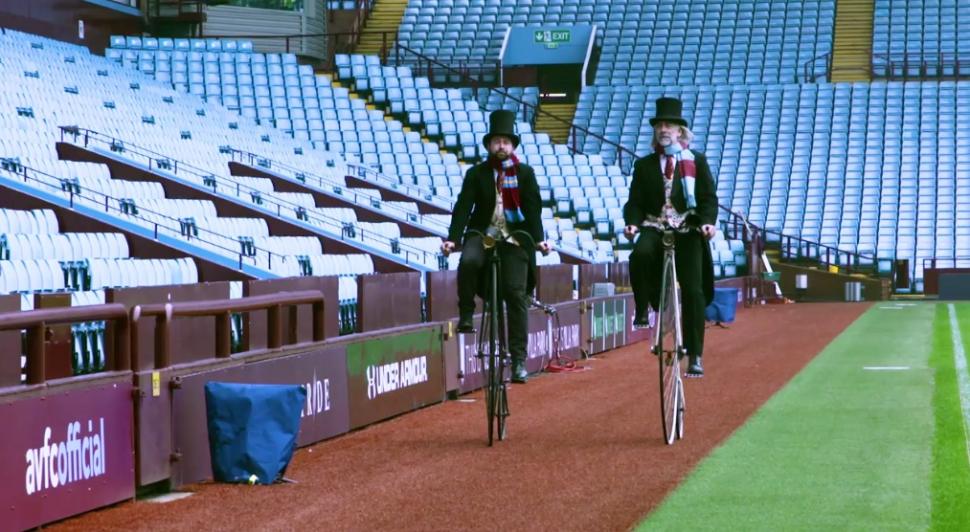 Every penny counts
by Alex Bowden

Two Aston Villa fans will tomorrow ride 50 miles from Pride Park to Villa Park on penny farthings. Father and son Alistair and Sebastian Cope from Velo Vintage are raising awareness and funds for the club’s charity, the Aston Villa Foundation.

“It looks comical – I do get that,” said Alistair, but added: “It’s great for us because it makes everyone else happy at the same time.”

Alistair and Sebastian usually make some sort of sponsored penny farthing trip at Easter (branding it ‘every penny counts’), but this year decided to hold off for Villa’s final home match.

Although they now live in the West Country, the family originally came from Aston in the late 19th Century. This was pretty much the penny farthing’s heyday and also the time when Aston Villa was founded. You can probably guess the exact year from the fact they’re aiming to raise £1,874.

The Aston Villa Foundation runs a number of projects to address social issues within Birmingham and beyond. You can donate here.

Later this year, Mark Beaumont – the man who cycled round the world in 80 days – is going to make an attempt on the penny farthing hour record.

He said: “I have been training hard around the parks of Edinburgh and you get some funny looks. The hour record is 23 and a half miles, which is pretty nuts on a penny farthing, but I have been quite enjoying not training ultra-endurance – this is just me and my mates wanting to do something eccentric and daft.”

Beaumont previously cycled the 100-mile Etape Royale route on a penny farthing in 2015.