Vuelta Stage 18 reaction: Cav applauds team mates as he makes it a hat-trick of stage wins

Meanwhile, will Mosquera's red jersey dreams cause sleepless nights for Nibali?...
by Simon_MacMichael

Mark Cavendish of HTC-Columbia acknowledged this evening that his team mates had their work cut out today and expressed gratitude that their support paid off, with the Manxman clinching his third individual stage victory of the race in Salamanca to consolidate his lead over Tyler Hamilton, who finished fourth, in the points classification.

“Quick Step was really strong today,” Cavendish admitted afterwards. “They’ve a great job as a team at the end. They went very fast in the last corner. We’ve got seven guys here and one is up on GC [Peter Velits, third after yesterday’s individual time trial], so we had three guys to chase,” he continued.

“Martin Velits did a huge effort to catch Philippe Gilbert in the last ten kilometres. With 3km to go, Peter Velits did a massive turn,” Cavendish went on, and acknowledged that the Slovak rider’s support was a selfless act on his part, given his own position in the race. “He should keep his energy for the next stages,” Cavendish maintained, adding: “It shows the kind of person he is.”

Regarding the fast run-in to the line, Cavendish admitted: “I changed gear maybe five times in the last 500 metres. After Matt Goss did a massive turn as well, it still went fast, fast, fast,” and once again praised his team mates, saying, “We’re really proud of these guys today.”

His final thought was also for his colleagues, rather than the fact that the record books show the name ‘Mark Cavendish’ as the winner of three stages to date in this, his maiden Vuelta. “Of all my four wins here, the most important is the team time trial on day one,” he said.

Cavendish held on to edge out the Argentine sprinter Juan José Haedo, whose directeur sportif at Team Saxo Bank, Bradley McGee, said afterwards: “JJ has been very hungry these days. It’s good for him to be up there. A sprinter is always looking for victory but in these circumstances, he’s just happy to be fighting for victory. Second and third places are also part of the package.”

Race leader Vincenzo Nibali, who has a 38-secodn lead over Xacobeo-Galicia’s Ezequiel Mosquera, was relieved to have got through the day without mishap. “For us it hasn’t been a quiet day at all,” claimed the Liquigas-Doimo rider (below). “We had to be attentive all the time. Ultimately, it’s one more day with no problem. At the end, it’s been a bunch sprint. Tomorrow is another dangerous stage. I live it day by day. On Saturday, Mosquera and I will play for the overall win at Bola del Mundo,” added the Sicilian, referring to the summit finish on the climb outside Madrid that is a regular training run for Alberto Contador.

“I’m serene. I also know that luck will be an important factor,” he concluded.

Mosquera for his part hasn’t given up on moving ahead of Nibali on Saturday’s decisive stage, and with time bonuses on over for the first three finishers and the Italian cracking on Monday’s ascent to Cotobello, another summit finish, the race is far from over.

“Last night I’ve dreamt that I was in red jersey in Madrid,” confessed the Xacobeo-Galicia rider, who is being strongly linked with a move to Vacansoleil next season. “I don’t know if it’s a premonition, but this is the big chance of my life,” he added.

Omega Pharma-Lotto rider, Olivier Kaisen, involved in the day’s breakaway (pictured below) which was reeled in with the last of eight escapees finally caught shortly before the 10km to go banner, reflected: “After having worked a lot for Philippe Gilbert when he led the Vuelta, I have more freedom and I have done my third breakaway in one week. It was almost mission impossible since the bunch didn’t let us more than two minutes’ lead.” Kaisen continued: “We accelerated 40 or 50km away from Salamanca but it wasn’t enough. Fortunately, my sixth place at the Lagos de Covadonga on a terrain that is not my forte makes me think that I haven’t done all those breakaways for nothing.”
Meanwhile it looks increasingly likely that one team that will be missing from the peloton next year will be Bbox Bouygues Telecom, whose management have so far been unsuccessful in signing up a replacement headline sponsor.

Whether or not they do manage to line up a new sponsor, key riders seem to have already decided that they’d be better off elsewhere. Yesterday, Perrick Fedrigo, stage winner on the Tourmalet during July’s Tour de France, announced that he would be riding for Francaise des Jeux in 2011, and today, Nicolas Vogondy, who unlike Fedrigo is taking part in the Vuelta, confirmed that he too is off to pastures new.

The 33-year-old French national time trial champion said: “This morning I have signed a two-year contract with Cofidis. Jean-René Bernaudeau told us that he would announce his new sponsor on August 15, then on September 1st and now it’s supposedly for September 20. I’ve called him to tell him that I couldn’t wait any longer. I’m stopping the Vuelta tonight. I’ve worked well for the time trial at the world championship. I’m ready.”

Cofidis will be the fifth team of Vogondy’s careeer, all of them French – besides Bbox Bouygues Telecom, he’s also raced for Francaise des Jeux, Credit Agricole and Agritubel.

Another Frenchman, Pierre Cazaux of Francaise des Jeux, was involved in a nasty looking crash at the feeding zone on today’s stage (below), but was able to get back on his bike and continue to finish the stage. 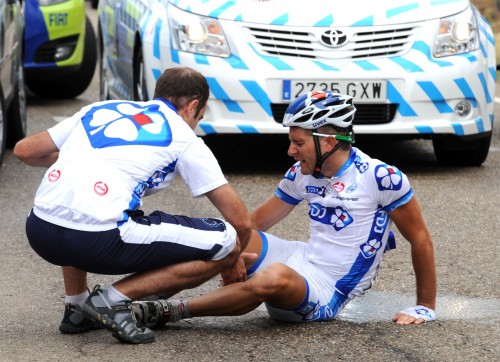