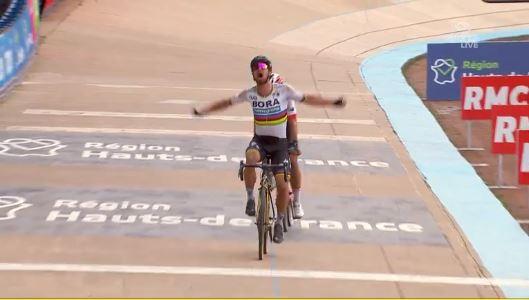 Peter Sagan has won the 2018 edition of Paris-Roubaix, launching an attack 53 kilometres out to distance his chief rivals and bridge across to the riders in the lead, then beating AG2R-La Mondiale’s Silvan Dillier.

The Slovakian’s attack came after earlier attempts by riders including Zdenek Stybar of Quick Step Floors and defending champion Greg van Avermaet of BMC Racing had come to nothing.

Sagan’s move was a decisive one however, and he soon reached the trio of riders at the head of the race, Dillier, Jelle Wallays of Lotto-Soudal and Sven Erik Bystrom of UAE Team Emirates.

The latter pair were soon dropped, leaving Sagan and Dillier to try and keep their pursuers at bay, their advantage hovering between 45 seconds and one minute and never seriously under threat.

Coming into the velodrome in Roubaix at the end of the 257-kilometre race from Compiègne, which took place under mainly clear, sunny skies, Sagan dropped behind Swiss champion Dillier.

Everyone knew he was biding his time before launching his sprint and that it was unlikely the AG2R-La Mondiale rider would have a response, and so it proved.

Swooping down inside Dillier on the banking of the final bend, Sagan – and all present in the velodrome – knew the race was his.

Inside the final kilometres, meanwhile, Terpstra had got of the front of a select chasing group comprising Sep Vanmarcke of EF Education First-Drapac, defending champion Greg van Avermaet of BMC Racing, and Trtek Segafredo’s Jasper Stuyven.

The Dutch rider took an uncontested third place, 57 seconds behind Sagan and Dillier, while van Avermaet won the sprint for fourth, a further 37 seconds back.

Sagan is the first rider since Bernard Hinault in 1981 to win the race while sporting the rainbow jersey of world champion.

Team Sky’s Geraint Thomas crashed out on the first section of pave, and team mate Luke Rowe would also see his race ended by a nasty-looking fall.