Cases involving cyclists cost 17 per cent more to settle than those brought by drivers due to personal injury element, charity finds
by Simon_MacMichael

Cycling UK says that local authorities across the UK are spending almost £9 million a year on compensation and legal fees relating to cases arising from potholes, with cases brought by cyclists costing more to settle than those involving motorists due to the likelihood they will have involved personal injury.

The national cyclists’ charity said that in total, local authorities responding to a Freedom of Information (FOI) request had spent £43.3 million in settling cases brought by cyclists and motorists in the past five years.

It highlights that the amount – which does not include time spent by council staff on dealing with claims – is equivalent to around 17 per cent of the government’s £250 million Pothole Action Fund, announced in April 2015 and covering a five-year period.

But with replies received from 156 of the 212 highways authorities asked to provide information, meaning that around one in four did not respond, the actual amount of money paid out in the five years from 2013-17 is likely to be much higher than the headline figure.

According to Cycling UK, key findings include:

670 cyclists and 30,893 drivers had their claims accepted

Cycling UK said that the fact cases brought by cyclists resulted in compensation 13 times higher than those initiated by motorists was evidence they are more likely to involve personal injury rather than just damage to property.

It added that with the Department for Transport (DfT) that road traffic incidents involving personal injury costing an average of £15,951 once NHS costs, police involvement and time off work is taken into account, the total cost of pothole claims over the five-year period could be £10.7 million higher, totalling £54 million.

The charity also revealed the results of a questionnaire completed by 5,000 cyclists as a result of a joint investigation it conducted with Cycling Weekly and BBC Radio 5 Live and which were featured by the broadcaster today on the programme 5 Live Investigates.

The survey found that only a little more than one in three cyclists – 36 per cent – who had been injured after a crash due to a pothole had contacted the council afterwards, with the majority highlighting the difficulty of making a complaint.

Half of the respondents had hit a pothole, with 54 per cent of them sustaining slight injuries and 8 per cent being seriously injured.

“It’s clear more people are being killed and seriously injured while out cycling each year due to years of persistent under investment in our rotting local road networks.

“The government should concentrate on fixing the roads we have first before building new ones.

“Councils need provide enough funding to adopt long-term plans for roads maintenance, rather than pursuing a policy of patching up streets only as they become dangerous.

"With the government looking to encourage more and safer cycling, then the UK’s road surfaces need to be safe enough for people to cycle on," he added.

Cycling UK, which runs the Fill that Hole website and app which allows people to easily notify local authorities of road defects that need fixing, said that it had not yet received responses to its FOI requests from Transport Scotland, Transport Wales or Northern Ireland’s Department for Infrastructure Roads.

Road casualty figures from the Department for Transport, summarised by Cycling UK in the table below, show that since 2007 almost 400 cyclists have been killed or seriously injured as a result of poor or defective road surfaces. 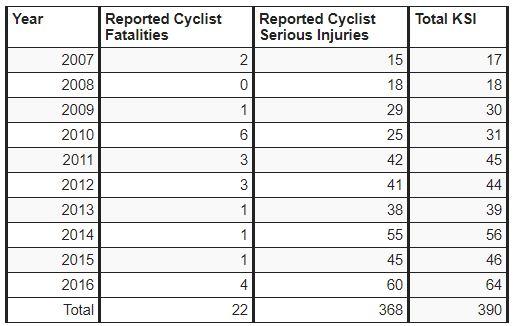