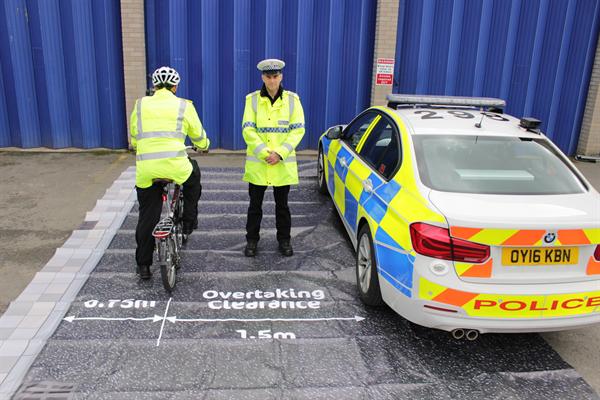 Police in Cambridge – the city with by far the highest levels of cycling in the UK – will tomorrow launch a close pass operation targeting drivers who give people on bikes insufficient space when overtaking.

The launch of Operation Velo by the Bedfordshire, Cambridgeshire and Hertfordshire Road Policing Unit follows intensive lobbying by campaign group CamCycle, which said that previous assertions that the city’s streets were too narrow to allow for such an initiative explained precisely why it was needed.

As in similar operations elsewhere which took their lead from the initiative devised in 2016 by West Midlands Police, plain clothes officers on bikes will identify motorists who do not overtake safely.

Drivers will then be shown the distance they need to give cyclists, recommended at 1.5 metres, with the help of a close pass mat.

In some instances, drivers may be charged with careless or inconsiderate driving and could face a fine of £100 and having their licence endorsed with three penalty points.

Officers will also be checking that vehicles have insurance in place and are free from defects or illegal parts, as well as targeting speeding, drink-driving, use of handheld devices and failure to wear a seat belt.

Cyclists who ignore red lights or traffic signals, ride recklessly or who do not display lights during the hours of darkness also fall within the scope of the operation.

According to Cambridge Constabulary, in 2016 there were 489 cyclist casualties in road traffic collisions across the county, and from 2012-16, nine bike riders lost their lives on Cambridgeshire’s roads.

Inspector Chris Huggins of the Bedfordshire, Cambridgeshire and Hertfordshire Road Policing Unit commented: “Each year there are many unnecessary deaths and serious injuries on the roads.

“One of the most vulnerable road user groups are cyclists, and with the launch of Op Velo, we aim to educate drivers as to safe passing around cyclists and deal with driving offenders who jeopardise rider safety.

“We will also be taking action with cyclists who take risks, by disobeying traffic signs and signs and riding without lights.

“We must respect each other when driving and riding on the roads, and we all have a responsibility to ensure the safety of others.”

In October last year, Cambridgeshire Constabulary said that the narrowness of the city’s’ streets meant that a close pass operation was impractical, although they subsequently requested a close pass mat from the charity Cycling UK.

The county’s Police and Crime Commissioner, Jason Ablewhite, commented: “Too many lives have been affected by inconsiderate and dangerous road use.

“Over the past year, I have listened to the concerns of road users and introduced a number of measures to make sure everyone, whether drivers, cyclists or pedestrians can be kept as safe as possible.

“This includes the introduction of county-wide police casualty reduction officer and the rolling out of Drive-iQ – an online driving experience to help young people learn how to drive safely.

“I am therefore pleased to see the Road Policing Unit introduce Op Velo and ask that people continue to respect other road users at all times,” he added.

Following the initial launch tomorrow in Cambridge city centre, it is planned to roll Operation Velo out to other parts of the county and to Bedfordshire and Hertfordshire.