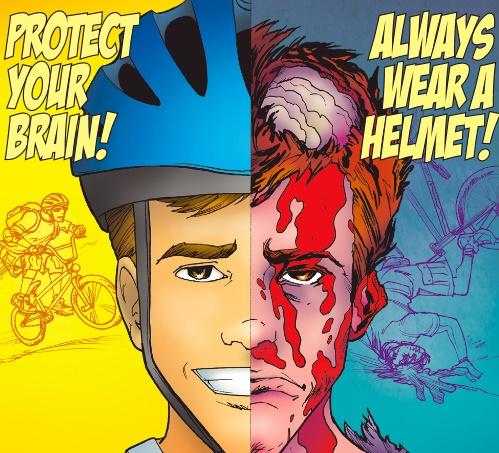 A fixation on cycle helmets is hampering efforts to improve bicycle safety in the United States, according to a professor from the University of Heidelberg. Streets Blog reports how Gregg Culver is arguing that the helmet occupies a special place within official bicycle safety discourse and that this distracts from more effective strategies to improve safety.

Early on in his paper, published in Applied Mobilities, Culver emphasises that his issue with helmet advocacy is purely one of proportionality: “I wish to make clear that I do not seek to make claims or recommendations on helmet use, one way or the other. Instead, my intention is to interrogate an exaggerated and arguably misplaced fixation with helmets.”

“If safe cycling can be achieved without helmets, and if relatively dangerous cycling persists despite helmet use, then basic logic dictates that the helmet simply cannot possibly be the most significant factor of bicyclist safety.”

Culver believes that attitudes to cycling in America, “must ultimately be understood within the larger context of the subordination of the bicycle to the automobile.”

He explains: “Virtually everyone involved in automobility has an understandable inclination to reflexively consider the death of cyclists as tragic accident rather than manslaughter. The helmet fixation redirects attention away from the overarching problem of vehicular violence, assisting in its denial.”

To analyse the attitudes of American public officials to cycling and cycle helmets, Culver conducted analysis of the official bike-related texts posted online by the planning departments of 25 US cities.

What he found was a “fixation” with cycle helmets which he says sees them prioritised over other safety measures in a number of different ways.

Helmet use was typically mentioned either first or among the first safety measures relating to cycling. He also found that ‘admonishments’ about helmet use were given special emphasis via exclamation marks, italics, or similar, whereas other safety measures were not.

He describes one example, from the city of Phoenix, where a strikingly graphic comic was used to illustrate the dangers of not wearing a helmet to children. In it, a cyclist’s head is split open and his brains can be seen by other cyclists.

In many cases, Culver identified an “overtly moralising tone that is largely unique to helmets compared to other elements of bicycle safety.” He said helmet use was presented not as a legitimate personal choice, but as “a moral duty.”

Reflecting on what he perceives to be a disproportionate emphasis on helmet use, he concludes: “Whether they (choose to) wear a helmet or not, cyclists should refuse to acquiesce to vehicular violence, and push for serious bicycle infrastructure investments and policies that safeguard vulnerable traffic participants. Considering that motorists operate fantastically lethal machines, a greater focus on improving motorist awareness for and responsibility toward vulnerable traffic participants should be pursued.”