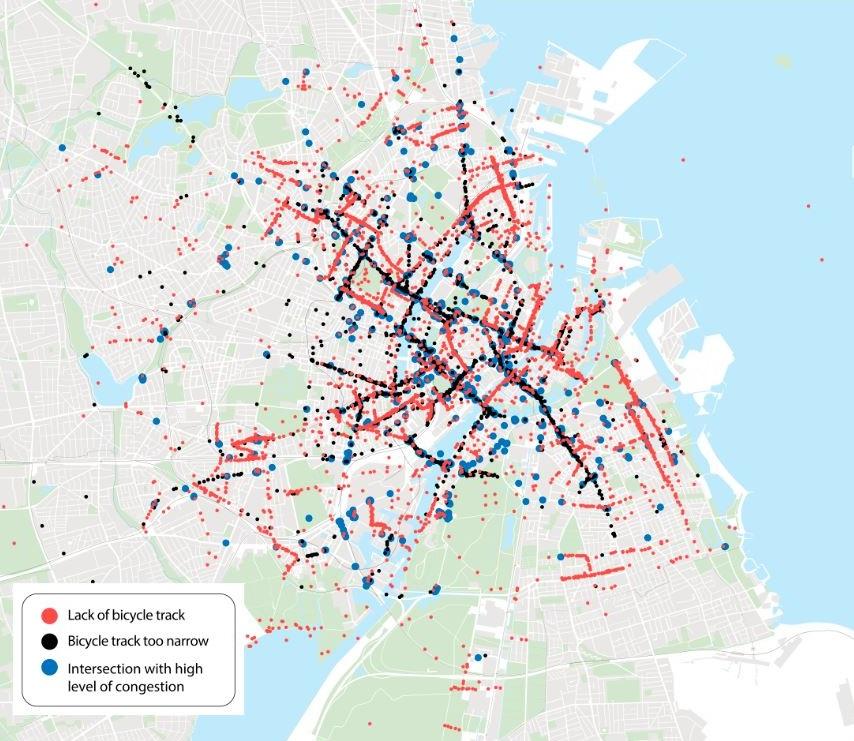 Copenhagen is mapping where its cyclists hate to travel, in order to pinpoint the areas most in need of infrastructure.

The Bicycle Track Plan was developed by the Cycling Embassy of Denmark, and is part of a grand plan to ensure that by 2025, there is a 50% by bicycle modal share for trips to work and education.

Cyclists were asked to mark a map to show their local facilities.

A mark in red is indication of no safe infrastructure, in black to indicate that current facilities are too narrow and in blue to indicate high levels of congestion.

Around 10,000 dots were placed on the map within ten days, according to the Danish Cycling Embassy, with red dots the most prominent feature.

There are as yet no funds for this particular plan, but budget negotiations are ongoing  towards 2025.

The Danish Cycling Embassy said: “Cyclists ‘feeling unsafe’ is a prominent argument for where new bicycle tracks should be established.

“The input from citizens and local groups have been an important source in pointing out the places where cyclists feel unsafe.

“Furthermore, the following criteria have been used to point out which stretches should have a bicycle track, both when it comes to increasing the sense of safety, road safety and general accessibility on the bicycle track network.”

“Regional bicycle commuter routes are believed to be a focal point if the municipality wants to reach their goal of 50% cycling to work and studies in Copenhagen in 2025.

“Commuting trips within the borders of the Municipality of Copenhagen are already, to a large degree, taking place on bikes (56% in 2015), wherefore the largest potential for change is estimated to be on the longer trips in and out of the municipality, which to a much larger extent are done by car.”