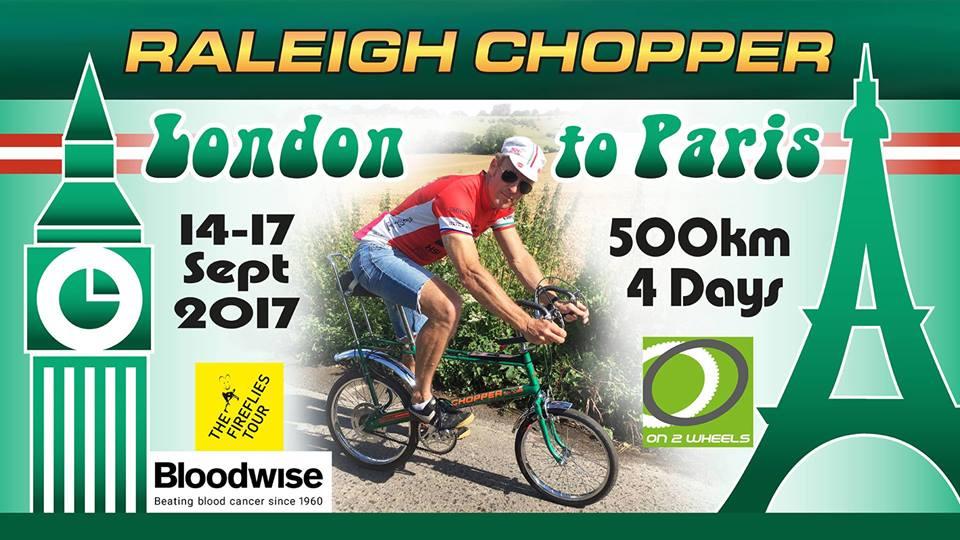 A cyclist from Henley on Thames who two years ago rode 31.9 kilometres in 60 minutes to set a Raleigh Chopper Hour Record will be back another of the iconic bikes next month to ride from London to Paris.

Matt Richardson, aged 51 and a lawyer by profession, is undertaking the ride to raise money for the charity Bloodwise, reports the Henley Standard.

When he set his Hour Record on the track at Reading’s Palmer Park Stadium in May 2015, he did so on a 1969 Chopper.

However, his 500-kilometre ride from the British to French capitals from 14-17 September will be undertaken on a 1972 Raleigh Chopper Sprint GT.

> Matt Richardson rides 32km in an hour - on a Raleigh Chopper

He has also previously ridden one of the iconic bikes up two of cycling’s most fabled climbs – Mont Ventoux in France, and Italy’s Passo dello Stelvio.

He told the newspaper: “None of those took longer than three hours, so I’m looking forward to the London to Paris ride as 500km in four days presents an entirely different kind of challenge.

“The long distances and consecutive days in a not particularly comfortable saddle will require a different kind of determination but it’ll give me plenty of time to think about why we should be supporting Bloodwise and the difference it makes to the lives of those diagnosed with cancer.

“I lost my father to cancer in 1999 and this gave me huge motivation to ride hard and raise money even harder.

“After becoming a father myself, my time was limited so I sought alternative ways to raise awareness. The Raleigh Chopper is a fondly remembered, iconic bicycle and provides the perfect vehicle for fund-raising.”

He isn’t the only cyclist we’ve covered on road.cc undertaking exploits on a Raleigh Chopper.

In 2015, Dave Sims from Lancashire rode the entire route of that year’s Tour de France two days ahead of the race, meeting Team Sky principal Sir Dave Brailsford along the way and even receiving a video message of support from that year’s winner, Chris Froome.