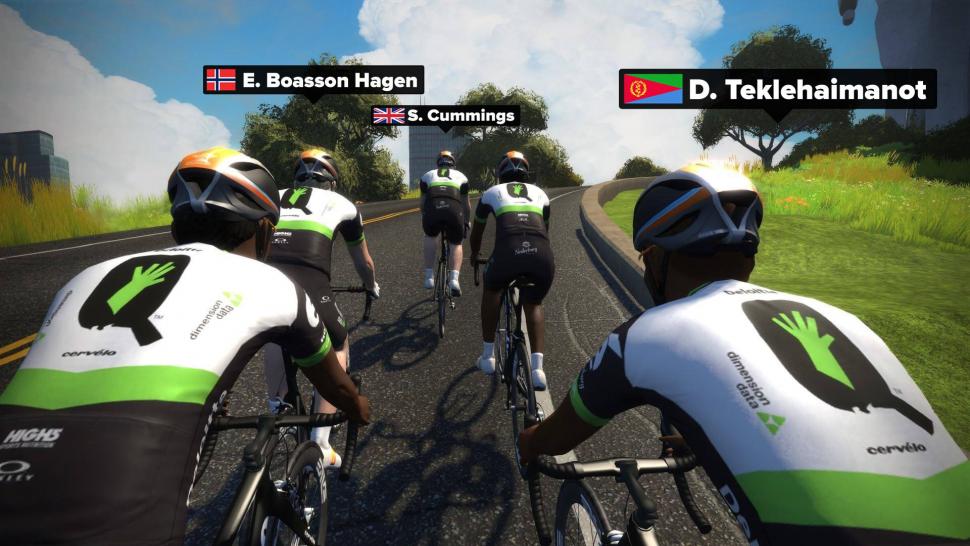 The online cycling platform, Zwift, has announced an expansion of its Academy that will see the top male graduate within the 18-21 age bracket earn a pro contract with Team Dimension Data’s Continental squad. The move follows a similar competition last year that resulted in 38-year-old former marathon runner Leah Thorvilson joining the Canyon//SRAM Racing Team.

Zwift Academy has up until now been a women-only training and talent identification programme, but thanks to the partnership with Team Dimension Data, it has now been opened to men.

The women’s programme is also continuing. You can sign up here.

Phase 1 consists of a six-week structured training programme, plus group rides and races, and runs from September 1 to October 13.

From the pool of successful graduates, the ten top female riders and ten top U23 male riders will be selected to complete an additional two weeks of riding and training, which will include outdoor rides.

From each of these groups, three finalists will advance to training camps.

The men will join Team Dimension Data for Qhubeka at their November training camp in Cape Town, South Africa, where one will earn the opportunity to race with the Continental Squad in 2018.

The women will join Canyon//SRAM at their November training camp in Mallorca with the winner following Thorvilson into the team.

Team Dimension Data for Qhubeka’s Team Principal, Doug Ryder, outlined his team’s motivation for getting involved: “Zwift has proven itself to not only be a rigorous data and training platform, but also a place where cyclists around the world can come together, engage, and become better riders.

“We want to take part in this unique experience to not only identify and discover talent, but also to educate others about our charity partner Qhubeka, an organisation that works to bring rural communities across Africa closer to nutritious food, clean water, schools, employment, and health care by providing them with utility bicycles.”

The Qhubeka charity provides specially designed bikes to rural communities in Africa. For every ten successful male graduates of Zwift Academy’s first phase, Zwift will donate a Qhubeka Bike to a community in need.

Zwift has committed to funding 500 Qhubeka Bikes and hopes to provide many more.

Team Dimension Data rider Steve Cummings, who is apparently a Level 18 Zwifter, welcomed the news, saying: “The team are super supportive about joining forces with Zwift. Many of our staff and riders are keen Zwifters, so it’s a great fit. Zwift isn’t only a credible training platform, but a cool way to engage with our fans and support the Qhubeka mission.”

1
Could our Tour de France on Zwift April Fools joke become a reality?
2
How much distance should you leave to the cyclist ahead in a time of pandemic?
3
Full Kit Ranker round 1: Your chance to vote for the greatest cycling jersey of all time
4
How to cycle responsibly in a time of pandemic – all you currently need to know
5
“This does not constitute your daily exercise,” police tell cyclist stopped on M60
6
Factor updates O2 road bike
7
New Wattbike Icon indoor training bike available at discount
8
“Peloton stud” Rory McIlroy invites golf rivals to static cycling challenge