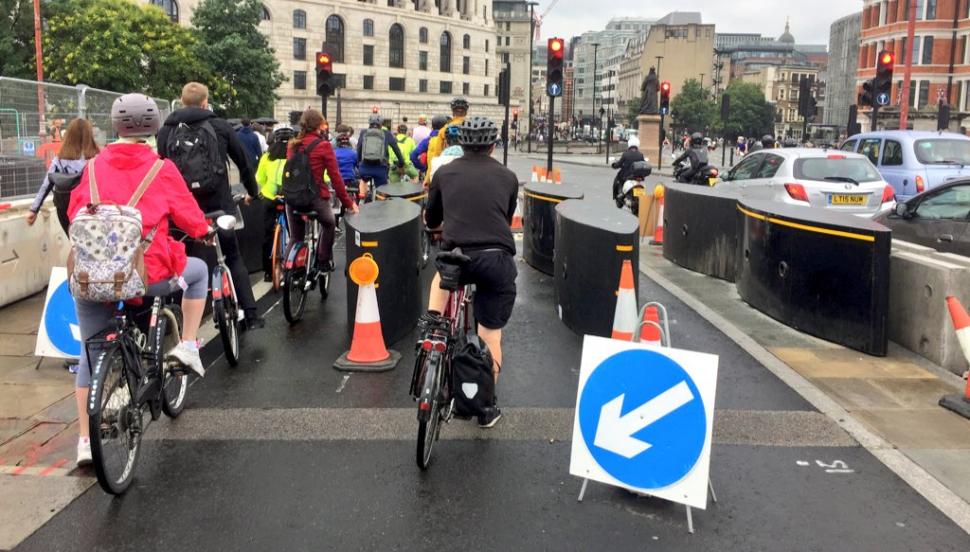 “But what about mopeds?” asks former Scotland Yard officer
by Alex Bowden

The gaps between security barriers on Blackfriars Bridge in London have been widened following reports of huge queues of cyclists at peak times. London Cycling Campaign welcomed the change, while a former Scotland Yard officer suggested that “the recent surge in moped-enabled crime could mean that terrorists will adopt this tactic.”

The barriers had previously only left room for cyclists to pass in single file at the north end of the bridge, but have now been repositioned to allow a better flow of cycle traffic.

Good to see that the barriers at the north of Blackfriars Bridge have been changed (thanks @williamhulley for pic!)https://t.co/hOy10UvZQs pic.twitter.com/nqhVT8rxow

The city’s Walking and Cycling Commissioner, Will Norman, commented: “We recognise that the barriers the Met installed to increase security have affected many of the cyclists and pedestrians who use London's bridges.

“That’s why TfL and I are working with the Met, local councils and others to deliver short-term improvements that maintain the security of all road users, such as these changes to Blackfriars Bridge, as well as longer-term solutions.”

David Videcette, who was in the Met’s counter-terror unit for six years until 2010, told the London Evening Standard: “These bollards may stop large vehicles from entering the bridge, but what about mopeds? The recent surge in moped-enabled crime could mean that terrorists will adopt this tactic.

“Even though motorbikes would perhaps not cause as much damage as a car or van, a knifeman on a bike would.”

He said that if barriers were widened “too much,” the public would be open to further attacks.

“If a vehicle of any kind is able to get through – they are useless. The Government needs to be more forward-thinking in its approach to prevention as terrorists are flexible and they will find a way around the measures already in place.”

"But it’s also vital that those measures don’t put people crossing the river on bike at risk. It’s positive to see the barriers, which were put in quickly, being tweaked and adapted to improve safety day-to-day for everyone."