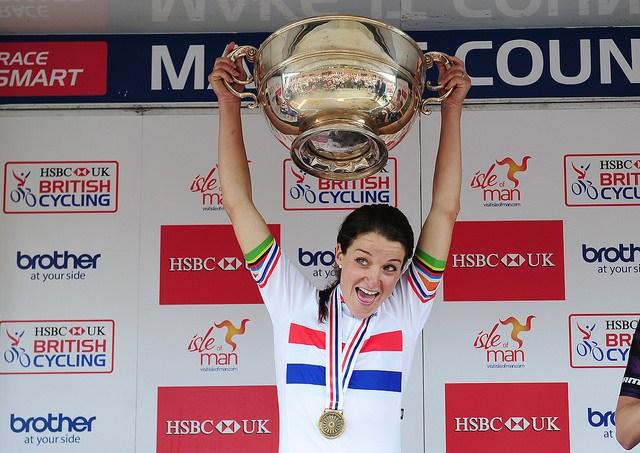 Former world champion triumphs on the Isle of Man
by Simon_MacMichael

Lizzie Deignan has won the British national road championship for the fourth time.

The Boels-Dolmans rider, a previous winner in 2011, 2013 and 2015, beat Team WNT’s Katie Archibald and last year's winner, Hannah Barnes of Canyon-SRAM, to claim the national champion's jersey on the Isle of Man today.

Elinor Barker of Matrix Pro Cycling, who had launched a solo attack from the break and at one point had a lead of more than a minute, was caught with less than 2 kilometres of the 103 kilometre race remainimg.

Following her victory, Deignan said: “It’s great to be in the jersey again. It’s always such a difficult race to win – you don’t just need good legs, you need a bit of luck too.

"It’s one of the hardest national championships I’ve ever won – it wasn’t a case of going in to the race with five rivals, it was more likely 20, and I’m very proud of the fact that we have so many women now who are capable of competing internationally as well as domestically."

She added: “I know that Elinor will be so disappointed but she shouldn’t be; it was an incredible performance. It’ll stand her in good stead in the future.”

Meanwhile, Mel Lowther won the under-23 title ahead of Team Breeze colleague Manon Lloyd in second and Drops rider Anna Christian, who was third.