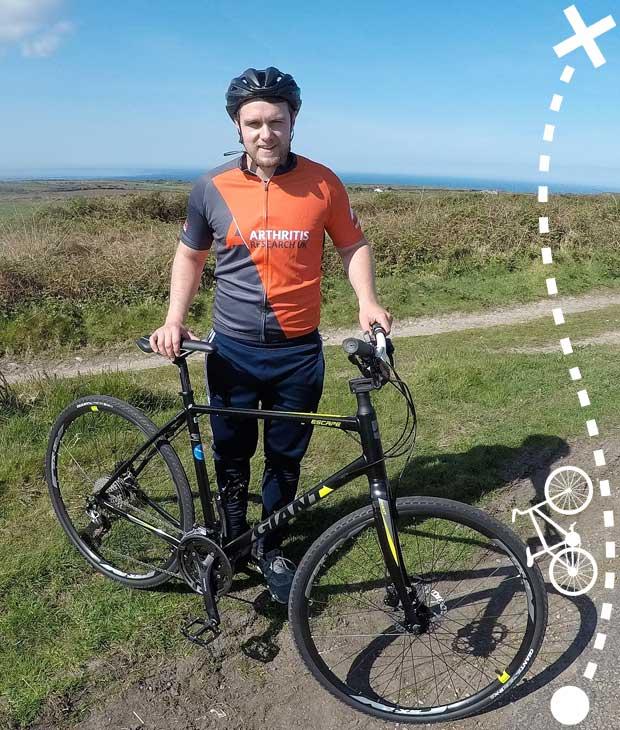 Cyclist set to tackle 2,000-mile ride across Europe… out of the saddle

A Cornwall cyclist is to cycle from Bath to Rome in a bid to inspire people to push the limits imposed by arthritis. 30-year-old Phil Bowers was diagnosed with septic arthritis in his right hip shortly after birth and can only pedal standing up.

Bowers will set off from Bath – known for its healing spa waters and also the location of the world-renowned Royal National Hospital for Rheumatic Diseases – on June 24, his 31st Birthday.

Because of the pain of his arthritis, he will set a daily target of around 20 miles a day, and is aiming to reach Rome by October 12, which is World Arthritis Day.

He said: “Just after birth I developed septic arthritis and this infection caused long term damage to my right hip. I've grown up with a limp, daily pain and limited movement in my hip.

“Because of my damaged hip I can only pedal my bike standing up and will have to set modest targets for the distances. I cycle every day, but I’m determined not to let my arthritis get in the way of me completing this challenge.

“Since I started training and getting physiotherapy, I have noticed I have more movement in my hip and I’m stronger than I was before. I’ve always thought that arthritis meant I couldn’t do things like this, but I’ve actually benefitted from the training.

“From my own experience people are often surprised to learn that I suffered from septic arthritis from such a young age. But I am far from being alone. Many young people live with all types of arthritis and need support throughout their lives. I hope my journey will inspire them.”

Bowers is hoping to raise £20,000 for Arthritis Research UK and Children's Chronic Arthritis Association. If you’d like to donate, you can do so via his Virgin Money page.

Somewhat bizarrely, Bowers is not the only one undertaking a long distance stand-up charity ride this month. Alan McDonogh is attempting to ride from Land’s End to John O’Groats and back (LEJOGLE).

However, where Bowers is riding a conventional bike and pedalling standing up, McDonagh is completing his 1,700-mile trip on a purpose-built stand-up bike. He is aiming to cover around 200 miles a day and is already underway, having set off on Friday June 16.

McDonagh is riding for Dementia UK, Cancer Research and the Stroke Association. Links to donation pages can be found on his website, which of course also includes the obligatory live tracking.