Adventures in paint from Italy and Germany… put your glasses on now!
by Tony Farrelly

We've just uploaded our second big gallery of road bike pics from Eurobike 2010, this baby has an Italian flavour and we'll warn you now eye protection may need to be worn when you get to the De Rosas. If you thought Pinarello's penchant for hitting the glitter (they've actually toned it down a bit this year) was a bit, er gaudy then the latest line up of top end De Roasas is likely to give you a fit of the vapours. Blingin' or mingin'?* You decide. 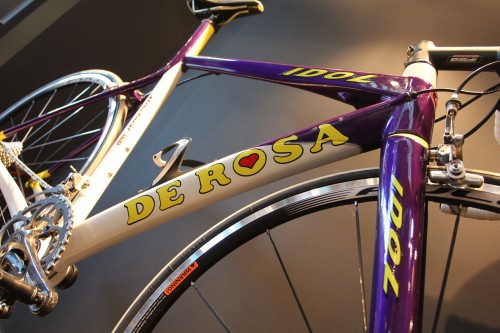 Even Mr Colnago, who in recent years has been a model of restraint (by Italian standards) confining himself simply to seeing how many times he could write his name on each frame has reached for the glitter box, in a restrained way of course. 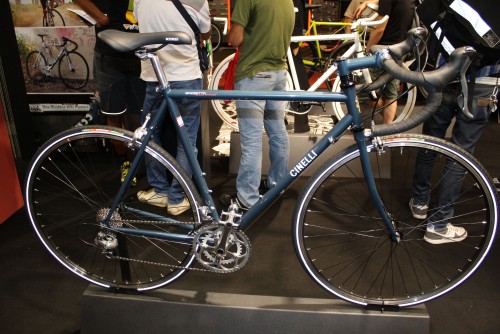 For full on Italian restraint check out the Cinelli Gazetta and XCT road bikes, the latter we've seen before made from 953 - a material we're not seeing quite as much as we expected to here. While the XCT pushes all the buttons for high end loveliness, we've got to admit it was the Gazetta that grabbed ou attention a nice mix of style an utlity. Given that it's kitted out with Shimano Tiagra we'd hope it'd hit the UK for sub £1000 - cycle to work scheme territory, but given that the fixed version sells for just shy of a grand we may be disappointed on that one. 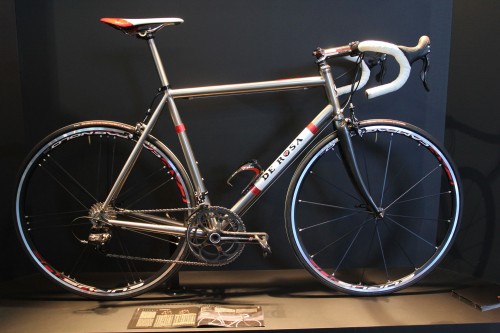 Actually when it comes to classy restraint, De Rosa are long time masters too as the gorgeous Titanio 3.2.5 and their Scattofisso track bike demonstrate. 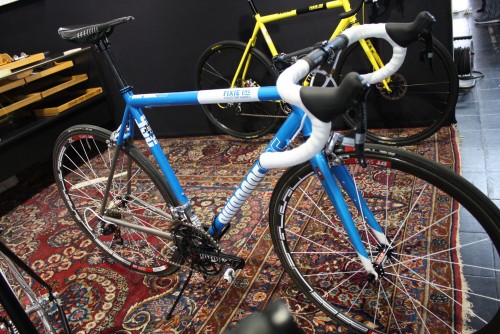 Meanwhile Fixie Inc have been doing interesting things with paint too, they haven't changed the paint job on their Chip Race road bike that much but they have stuck a titanium frame underneath it - not that you'd notice for all that paint. Hmm… don't you want people to know you're riding a Ti bike. If you like bright paint jobs it's also worth checking out Fixie's Pure Blood crosser in your fast expanding cyclo-cross gallery. While Fixie have been putting paint on their Ti bike Cube have been taking it off theirs with the 2011 Litening Ti sporting barely a lick compared to previous years. When it comes to putting paint on though Cube get our vote for best looking bike at the show, with their Litening SHPC in blue and black, in the process scooping the category for best use of a Team Sky inspired theme - pipping early favourites, Pinarello… AND also taking the gong for Bike that most looks like it escaped from Tron". No colour is dominating the show this year, but electric blue and black is much in evidence in these parts.

We'll have more galleries of road bikes and lots more coming soon, but in the meantime here's what we've done so far on the road bike front. We've also filled out our first Fixed and Singlespeed gallery and started another cunningly titled Fixed and Singlespeed 2 so long as TR's memory card holds out that should be filled to bursting fairly soon too. We've also got galleries of time trial bikes, e-bikes and much more on the go so check 'em out.