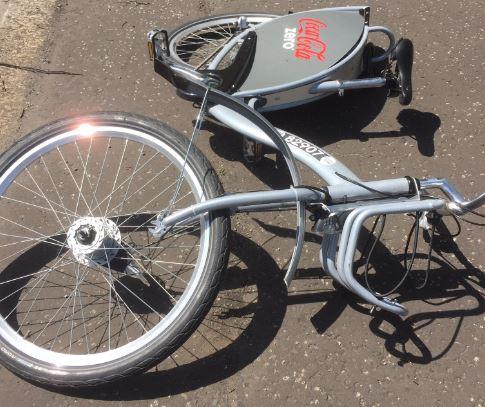 Adam Turkington says "wee shit" could have killed him...
by Simon_MacMichael

A man who crashed when the wheel came off a Belfast Bike public hire bicycle believes that vandals may have removed the nuts attaching it to the front forks.

Adam Turkington, 45, was left dazed when he hit his head after coming off the bike near Queen’s Bridge as he tried to mount a pavement, only for the wheel to detach itself from the bike.

Mr Turkington, a former director of Belfast Culture Night, told the Belfast Telegraph: "I had actually been cycling in from CS Lewis Square, so I had come quite the distance."

Vandalism of @BelfastBikes is rubbish when they go in the Lagan, but the wee shit that did this could've killed me pic.twitter.com/d0elPF1oTq

"I thought the wheel was a bit warped but I didn't think it was fully loose, and had intended to report it when I left it back."

He was treated by paramedics who determined that he had bruised ribs and did not have to go to hospital.

"My first thought was: 'What happened? Am I all right? Have I hit my head?' I had trouble breathing and luckily someone was walking by to help. I'm sore and have an ice pack on it now, but I'll be grand."

He continued: "Had I been on the road in the traffic when it come off ... I could have been tatty bread."

He told the newspaper that he believed vandals had removed the nut that held the wheel in place, but said: "I often think kids will be kids, and they don't think of the consequences of what they are doing, they probably thought it was some kind of You've Been Framed moment.

“We were all kids at one stage."

He said that he wouldn’t be deterred from hopping on one of the bikes again, describing it as “a great scheme,” but added: “It's also a community scheme and if people see this type of thing going on they need to report it. Otherwise it'll end up costing us all more money."

The Belfast Bike scheme, which is sponsored by Coca-Cola, was introduced in April 2015 and the Northern Irish capital’s city council says vandalism costs it nearly £2,000 each month.

According to the Belfast Telegraph, covert operations against vandals by the police, working alongside Belfast City Council, have resulted in four arrests and the recovery of six bikes.

A spokesman for the Police Service of Northern Ireland said: "These bikes are a great public resource for everyone to use across the city, so it's important that we work together to prevent them from being abused and stolen."

Mr Turkington’s experience highlights one thing that any user of a public hire bike would be well advised to do before they ride it – to give it a quick check to ensure, among other things, that tyres are properly inflated and that no critical parts are loose.