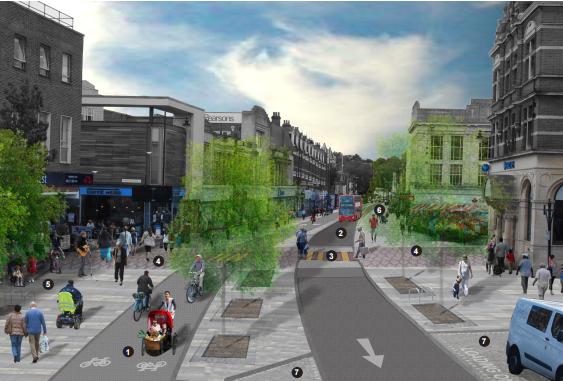 A Mini-Holland scheme in north London has become the bitter focus of a general election row.

Candidates have set against one another as they debate the Cycle Enfield, which plans to spend £42 million on safe cycling routes.

The Tory candidate David Burrowes says he will scrap the scheme if elected.

He claims that businesses are being affect by the disruption.

“Cycle lanes have their place and merits, but it’s a whole different picture when you’re talking about an outer London suburban high street and you’re trying to put a segregated cycle lane in at a huge amount of cost,” Mr Burrowes told the Evening Standard.

He added: “The result of it is not actually improving air quality […] and people being funnelled in a congested tailback of buses and cars.

“It may work in other parts of the country, but as far as Enfield’s concerned, there’s not the broad approval that I think would need to be there to go through.

“There’s already been incidents of cars being written off and pedestrians tripping over the things separating the cycle lanes.

“What they need to be ready to do is if evidence suggests that it’s causing safety problems, then they need to have to the guts to say ‘we’ve not done it properly and we’ll find a different way of doing it’.

Labour are the dominant party in Enfield, and candidate Bambos Charalambous said: “I don’t think it’s a primary issue.

“I think people have raised some valid concerns about it [but] the scheme isn’t up and running yet. People need to be patient and allow the scheme to get up and running and see where it goes from there. I think it’ll be a good thing for the area.

“I’m very much excited by it,” he added.

A London Cycling Campaign spokesman said: “Once completed, the scheme will bring benefits to businesses by creating places that are easier and more attractive to visit, shop and do business in.

“Major roadworks can cause short-term, localised congestion and pollution – but longer term these schemes will help lots of people swap unnecessary car journeys for walking and cycling, boosting local business and residents’ health, while cutting congestion, air pollution and collisions.”

Last year we reported how a judicial review by campaigners to stop a “Mini Holland” project going ahead in North London was rejected.

The group, called Save Our Green Lanes (SOGL), said the Cycle Enfield scheme, which will see private cars diverted from Enfield’s high street and cycle lanes installed in Palmers Green and Enfield Town, would worsen air pollution and have little or a negative effect on business.

However, the High Court dismissed the case earlier this month and ordered SOGL to pay the council’s costs.

Mr Justice Ouseley disagreed with the group’s assertion the scheme was “unfair” and the consultation process “flawed”.

Costas Georgiou, one of SOGL’s leaders, said the group had witness statements from people denied access to paper copies of the consultation, but the judge accepted the council’s claims documents had been provided to people who needed them.