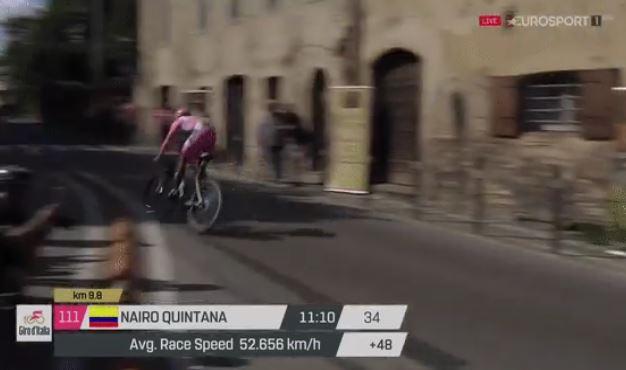 Colombian may have lost maglia rosa today - but he'll win a lot of fans with these skillz .....
by Simon_MacMichael

It's even more impressive when seen from this angle in a video on the Gazzetta dello Sport's website.

The Colombian's save meant he avoided a spectacular crash - but Gazprom-RusVelo rider Pavel Brutt wasn't quite so lucky.

Nor was Team Sky's former world time trial champion Vasil Kiryienka, who crashed on the final bend ... he still set what at the time was the fastest time, but finished fifth on the stage, 2 minutes off the pace.

OOF!@TeamSky are having some rotten luck at the #Giro100 as Vasili Kiryienka goes down pic.twitter.com/dfRoTrv5gk

Meanwhile, Sunweb's Tom Dumoulin, the new race leader, almost took out two podium hostesses after being presented with the maglia rosa following today's stage ... although not in a George Hincapie, "Reader, I married her" kind of way.

Photo of the day, we reckon, goes to top Belgian snapper Tim De Waele, who set up this pic of Jasper Stuyven, who was clearly not on one of those days where he was going to leave it all on the road.

No stress for me on the TT day so had time for some fun with @KimTiebergyn and @tdwsport. #JaspergoesItaly #Giro100 pic.twitter.com/cfOeRQTX9o