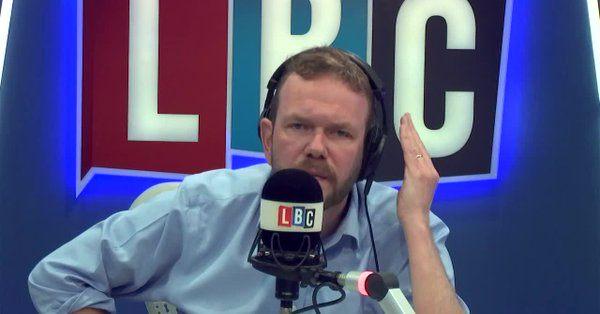 LBC radio host: "Any argument against cycling is an argument in favour of pollution, obesity and death"

The hosts of consecutive shows on radio station LBC yesterday provided a striking example of the polarised attitudes towards cycling prevalent in the UK’s mainstream media, with morning show presenter James O’Brien insisting that “any argument against cycling is an argument against pollution, obesity and death.”

His comments came after his colleague Nick Ferrari, in the station’s breakfast slot, had spoken of cyclists put themselves in danger by riding through red lights and undertaking vehicles.

LBC was focusing on cycling following the publication on Tuesday of the report from the All Party Parliamentary Cycling Group (APPCG) on Cycling and the Justice System.

> ‘Driving is a privilege, not a right’ says APPCG as it calls for Government to close driving ban loophole

The APPCG called, among other things, for the Highway Code to be changed “to give clearer priority to cyclists (and other vulnerable road users), particularly with regard to the issue of close overtaking and the need to give way to cyclists and pedestrians at side road crossings, which would support the introduction of new cycling infrastructure.”

A tweet from LBC trailing its coverage of the report drew a withering response from West Midlands Police’s road policing unit, which has been widely praised for its close pass initiative launched last year and which is now being adopted by forces nationwide.

@LBC Society is defined by how we look after our most vulnerable, this is the same on the roads, at the moment the UK is barbaric #attitude #care

O’Brien referred to one of the arguments deployed by opponents of protected cycling infrastructure such as London’s Cycling Superhighways – that they increase congestion and, by implication, pollution.

“It will stop people being obese which will save the NHS a fortune.

“It will stop people having breathing conditions caused by pollution which will save the NHS a fortune.

“Both of those phenomena will also increase the life expectancy of you and your children and the people that you love.

“It will make London a cleaner, greener, more pleasant place.

“The more roads you can actually shut completely, the more footfall you’ll have for shops and the retail sector that’s struggling like nobody’s business at the moment.

“And the more people that leave their cars at home, coming in on public transport let alone bicycles, the more all of those things will be increased.

“So I mean any argument against cycling is an argument in favour of pollution, obesity and death.

“That’s it, I don’t care how you dress it up or how hilarious you think you are.

“Any argument framed to discourage cycling is an argument in favour of pollution, of obesity, and of early death,” he added.

He wrote on the campaign group's Facebook page: "Ferrari did his usual tired trick of seeking to make all this about stating that cyclists were always in the right and victim-blaming and tried to male bully [Ruth] Cadbury [co-chair of the APPCG] into agreeing with him for quite a few minutes.

"He then tried to do the same with me and I stated that the report was clear that at a junction, there should be a hierarchy of right of ways, pedestrians first, cyclists second and motorists third, as this was the hierarchy of who is the most dangerous.

"I also explained that the law was NOT about endorsing dangerous undertaking at junctions which causes a small minority of crashes," McCarthy added.

In November 2015, we reported on how Ferrari had sparred with London's then Cycling Commissioner, Andrew Gilligan, over claims by LBC reporter Theo Usherwood regarding the number of cyclists using a newly opened Cycle Superhighway on Vauxhall Bridge.

Usherwood had claimed in a pre-recorded report that 40 per cent of cyclists were not using the protected cycle lane and were riding on the road instead.

When Ferrari quizzed Gilligan on the issue, the latter said: "That report I've just heard is a complete lie. I think he is quite clearly lying."