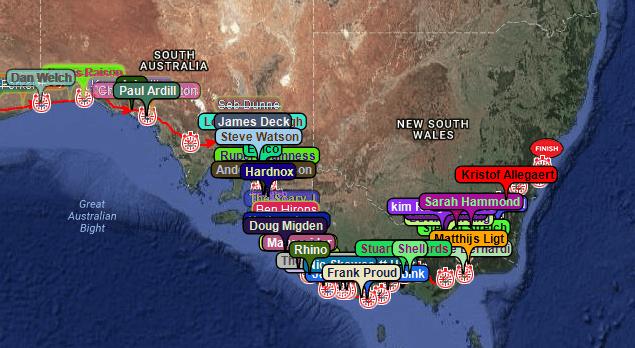 Videos: Kristof Allegaert back in lead of Indian Pacific Wheel Race after duel with Mike Hall

Belgian now well on his way to Sydney after thrilling day's racing when the lead kept changing hands...
by Simon_MacMichael

Belgium’s Kristoff Allegaert has seized back control of the Indian Pacific Wheel Race, leading Great Britain’s Mike Hall by 168 kilometres as he heads towards the finish line at Sydney Opera House.

Allegaert’s re-establishment of the lead he has held for almost the entire race followed a day when followers of the race were abuzz on social media about the battle taking place between the two men.

This time yesterday, the pair were almost inseparable, trading the race lead along the Murray River ahead of the tough climb up to Cabrumurra.

But while Allegaert pressed on up the ascent, Hall stopped for rest that was much-needed following his exertions to catch and briefly pass his rival.

By the time the Briton got back on the bike more than five hours later, the leader was over the top of the ascent and well on his way to Canberra.

Hall reached the checkpoint at Cooma at 7.48pm local time on Thursday evening – that’s 9.48am in the UK – but Allegaert had made it there a little more than eight hours earlier.

He’s kept on riding and is now across the border and into New South Wales and heading towards a rather rainy Sydney, which he should hit sometime tomorrow.

As the main picture above shows, there are cyclists spread out all along the southern Australian coast – so even once Allegaert and Hall hit the finish, there will be plenty of racing, and plenty of stories, still to come.

You can follow the progress of the two leaders, and the rest of the riders in the race, using the online tracker here.