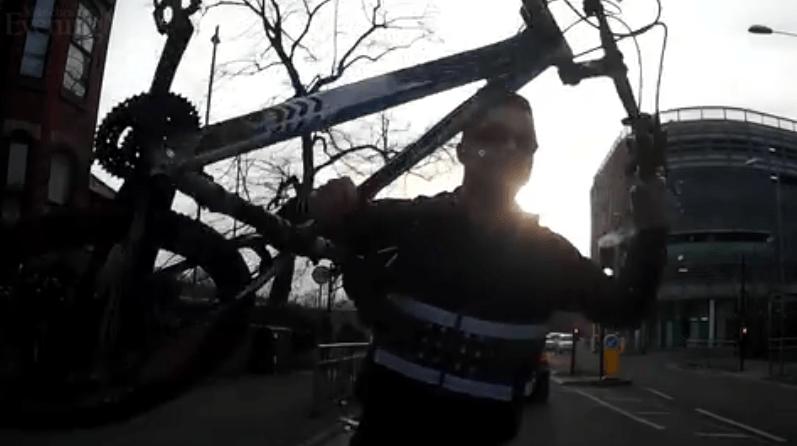 Dashcam footage has emerged of a cyclist lifting his bike and smashing the windscreen of a car, with the driver saying that the rider had claimed that she had driven in a cycle lane.

Video of the rider breaking the windscreen of Tracey Leng’s car was posted to Twitter by BBC North West Tonight, with the Manchester Evening News publishing a longer video of the incident.

It happened as Mrs Leng, aged 50, drove with her husband to visit her mother, 69, who is seriously ill in Manchester Royal Infirmary and is due to undergo potentially life-saving surgery this week.

As Mrs Leng waited at traffic lights on Hathersage Road in Chorlton-upon-Medlock, the cyclist rode past her then turned around and approached the vehicle.

He twice seems to be about to ride away before turning around, the second time ending with him raising his bike and smashing the windscreen of Mrs Leng’s Skoda Octavia.

He then rode off through the Manchester Royal Infirmary site despite Mrs Leng – who denied she had veered into a cycle lane – and her husband attempting to follow him.

Greater Manchester Police have obtained a DNA sample from the saliva of the suspect, who spat at the vehicle, and officers are appealing for information to help track him down.

Mrs Leng told the Manchester Evening News: “We’re still in a state of shock about it.

“We don’t know why he was so angry. There was no clear cycle lane and even if there was I definitely wasn’t in it.

“He started shouting and swearing but as soon as we told him it was all being caught on the dashcam he totally flipped.

“We were totally numb after he threw the bike.

“There was a big loud crack, we didn’t if the whole window was going to shatter. It was really frightening, we didn’t know what he might do next.”

Mrs Leng said the timing could not be worse due to her mother’s impending surgery.

“Things are bad enough at the moment,” she said.

“I was just so uncalled for, I cannot understand why anyone would do something like that.”

Anyone who has information is requested to contact Greater Manchester Police on 101 quoting incident number 1873 of March 26 or the charity Crimestoppers, anonymously, on 0800 555 111.