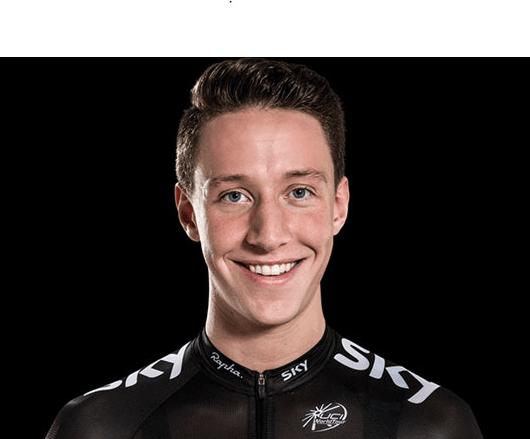 A former Team Sky cyclist has revealed that he injected himself with vitamins, in contravention of the UCI’s no-needles policy, as well as using the controversial but legal drug Tramadol, both without the team’s knowledge.

Josh Edmondson, who rode for the UCI WorldTour team in 2013 and 2014, made the revelation to BBC sports editor, Dan Roan.

The 24-year-old from Yorkshire, who rode for AN Post-Chain Reaction in 2015 before joining last NFTO last season, says he is speaking to anti-doping authorities.

He has also accused Team Sky of a “cover-up,” something its former head of medicine, Dr Steve Peters, denies.

Edmondson said that he injected himself with a cocktail of vitamins "two or three times a week" in 2014 as he tried to get a place in the team’s line-up for the Vuelta a Espana, which would have been his debut Grand Tour.

While he was racing at the Tour of Poland in July of that year, a team mate found the vitamins and equipment he was using to inject himself in his room, took a photo, and went to team management to raise concerns.

Peters acknowledged that Team Sky had been alerted, but did not report what had happened because of fears that the young rider "could be pushed over the edge," insisting that his welfare came first.

The vitamins themselves are not banned, but the method of administration via injection is, following the UCI’s no-needles policy, introduced in 2011.

Edmondson told the BBC: "In 2014 I was under a lot of pressure, not just from the team but from myself.

"You want to renew your contract for one thing, and for me the bigger thing was not letting anyone down – this team had given me a chance by signing me and a bigger chance by letting me go to a Grand Tour.”

He said he would inject a mixture of vitamins “two or three times a week maybe.”

He added: "It is a very daunting thing to be doing, especially as I was sat in a room in a foreign country alone at night. It's just a very surreal thing you do. It's not something you take lightly. You're doing it out of necessity really."

He spoke of the moment he realised his secret was out when a housemate, a member of Team Sky, found what Peters described as "a needle and some vials" and took a photo of them and alerted the team.

Edmondson said he returned from a race “and noticed all the vitamins which had been hidden in my room were on top of this chest of drawers – and I realised I'd been caught out.”

"At that point I was panic-stricken. I'd never known anything like it. You just go weak and I had no idea what to do."

He admitted that he “broke down” when Peters contacted him. “I was crying, I was in shock. And he said, 'somebody has sent us some photos of this intravenous equipment and the vitamins'."

However, the BBC says that the incident was not reported by Team Sky, because Edmondson told Peters he had not used the paraphernalia found in his room.

Peters said: “He fell apart at the seams quite dramatically. A number of things I asked him during that interview really alarmed me.”

Peters: "The welfare of the athlete was number one"

"I was now in a position where I can say the welfare of the athlete was number one,” added Peters, who spoke of how Edmondson had told him that he hadn’t injected himself with the vitamins because he didn’t know how to.

"This didn't quite ring true to me,” said Peters, who suspects that Edmondson may have been ill at the time. “I felt this is very odd from what I've experienced in the past when I've been involved with anti-doping issues. So I said to the team: 'I want to stop here’.”

Team Sky, who sought legal advice on the issue, did not report it to the relevant authorities, a decision Peters still supports.

“I suppose if I'm looking at safety issues I did think there was a really big risk this lad would be pushed over the edge,” he said. “I stand by my decision. I think I'd definitely have told them if I thought this young man was trying to cheat, but I don't think he was doing that. I think it was a panic reaction.”

He added: "We did it on good faith and decided on two counts. One, we didn't think he'd violated any rules and second and, most important, he was not in a good place."

Edmondson however insists that he told Team Sky management that he had injected himself and accused them of a “cover-up” – a claim that Peters refuted.

"It's not a cover-up,” said Peters. “Once you use that word you are saying there was an intent behind us to conceal and that was never the case."

Edmondson also talked about the effects of the painkiller Tramadol, which is not banned but which many teams avoid because of its potential side-effects, with the young rider saying it left him feeling “absolutely battered” and that withdrawing from it made me feel depressed … I felt like someone had thrown me down some stairs for a few days.”

He added: "The dangerous thing about it is you don't know when you're coming to your limit. It's not a performance-enhancing drug, it doesn't make you any better, you're not getting any more from your body, you are just pushing yourself a bit harder.

"When you're young and you are facing some kind of depression and it might be linked to some sort of drug you are definitely in denial about what that problem is - I just saw it as the stress of doing that job and training hard. I wouldn't have ever acknowledged that Tramadol was doing that.

"It was a serious problem for me especially towards the end of 2014. I didn't leave the house for two months. It doesn't get much worse than that."

He accepts that he was “naïve” not to seek help from the team about his problems, saying: "It just seemed at the time that if I'd gone to them and told them, 'I'm having this too much, I might be abusing it a little', I didn't think they would help me, just see it as a negative thing.

Team Sky said in a statement: "We are confident we have mechanisms in place which encourage a rider to bring any issues they may be experiencing to staff in confidence.

"We are also satisfied that staff are equipped and able to raise any concerns they may have regarding a rider's welfare, and for the team to offer support," it added.