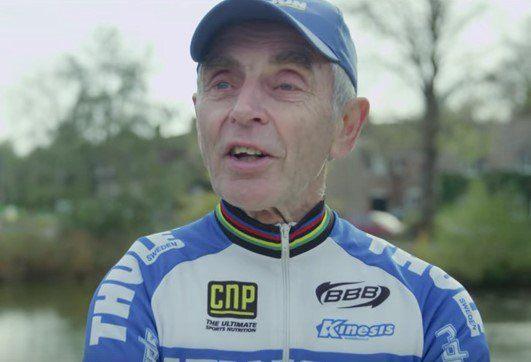 "Possibly the toughest task I have ever faced during my 60 years of competitive cycling," he says...
by Simon_MacMichael

Veteran cyclist Mick Ives is to ride the route of the 100th Giro d’Italia in May – at the age of 77.

The Coventry-born ex-pro describes the challenge, named Mick’s Italian Job, as “a daunting task for anyone, but possibly the toughest task I have ever faced during my 60 years of competitive cycling.”

He aims to raise £60,000 – one for each year in which he has been involved in the sport – for four charities. Those are Barnados, Rainbow Children’s Hospice, Padraic Sweeney Kidney Research and Zoe’s Place Baby Hospice, and Ives  will be sponsored by Jewson, Polypipe and McCann.

Eight times a Master’s world champion, and with 85 national titles across various age groups and disciplines to his name, Ives is the only male rider to have represented Great Britain on the road and track as well as in cyclo-cross and mountain biking.

An eight-year stint as a professional on the road was followed by a further eight years as a pro mountain biker, after which Ives moved into management both for trade teams and the national team at mountain biking and cyclo-cross world championships.

This will be the second time Ives has taken on the route of a Grand Tour – in 2005, and at the age of 65, he rode the entire parcours of the Tour de France a day ahead of the race.

The Giro d’Italia starts on Sardinia on Friday 5 May and will finish in Milan a little more than three weeks later.

He will be undertaking the challenge on a Colnago C60 bike donated by Ernesto Colnago himself, who also designed the paint job.

You can donate to Mick’s Italian Job on his Virgin Money Giving page.

1
The new LoreOne is definitely the most expensive bike shoe you’ve ever seen
2
Pro launches £600 Vibe Evo integrated handlebar, along with new Stealth Curved saddle
3
Near Miss of the Day 618: Morrisons lorry driver in close pass on two cyclists (includes swearing)
4
German Olympic cycling coach caught on TV making racist comment during men’s time trial
5
Near Miss of the Day 619: Close pass followed by punishment pass gets driver a “stern talking to” from the police – and nothing more
6
Cyclist who killed London pedestrian jailed for two years
7
Pick-up driver who crashed into group of cyclists charged with murder
8
BMX gold for Team GB’s Bethany Shriever, silver for Kye Whyte