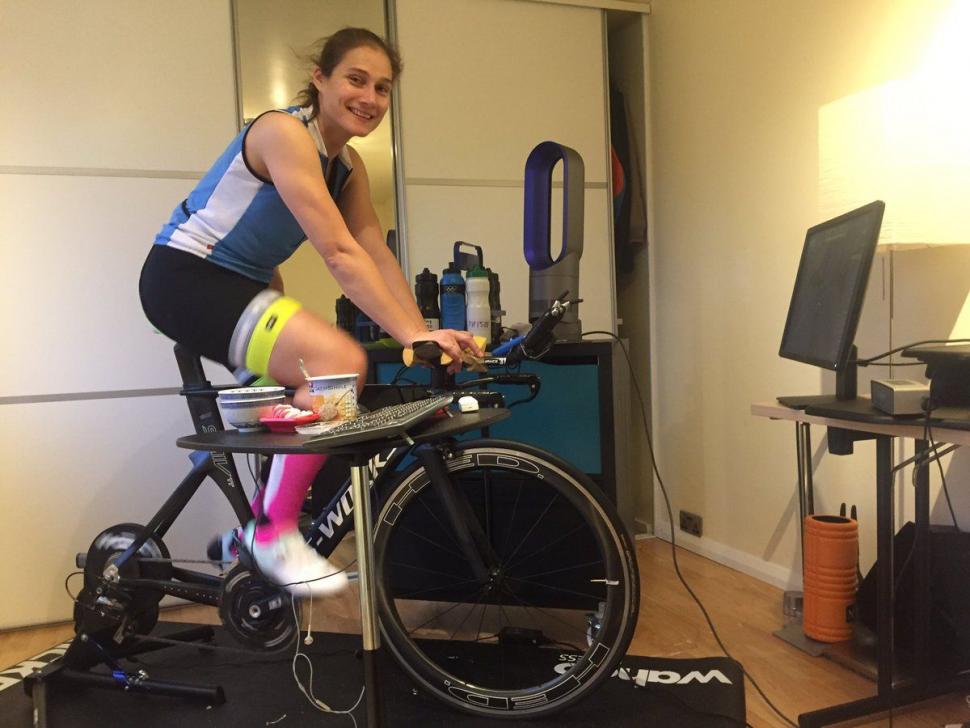 London ultra cyclist Jasmijn Muller on Monday set a new distance record on Zwift, the computer software that allows cyclists to ride in a virtual world – and all without leaving her south west London home. What's more, she's pedallimg on into Tuesday to push the record on, her aim being to ride for 72 hours.

The former British national 12-hour time trial champion even held a Facebook Live session at 3 o’clock on Monday afternoon, which marked exactly two days since she began her ride on Saturday.

The distance she beat was 1,626 kilometres (1,010 miles), set in December by Chris ‘Hoppo’ Hopkinson, the first Briton ever to complete the Race Across America as a solo rider.

The Zwift software enables cyclists to join others on virtual rides, and Hopkinson was among those to ride with Muller yesterday on the Watopia Flat Volcano Course.

Muller is aiming to later this year to break the record for the quickest time cycling from Land’s End to John O’Groats as well as for cycling 1,000 miles.

The ride was  aimed to give her insight into how she will cope with the demands, as well as raising money to help fund that attempt, and for the charity Cancer Research.

Outlining on her website the reasons for the Zwift ride, she said it was “To test how my body and mind respond beyond 24 hours to things like sleep deprivation, nutrition, etc. all within a safe indoor environment before my LEJOG and 1000 mile record attempt on the road in September 2017,” and “To see how close women can come to men in ultra endurance challenges.”

Muller originally planned to attempt the Zwift record at last week’s London Bike Show at Excel, but said on her website that “whilst the organisers welcomed the initiative, the additional cost for overnight security were rather high!”

She broke Hopkinson’s record a little after 10.30pm on Monday evening according to Twitter - and after a 90-minute sleep was back in the saddle.  Her epic - if static - ride should finish at 3pm today.

And she's done it. Ladies and gentlemen, a new #ZwiftDistanceRecord of 1,627km. Congratulations to record breaker Jasmijn Muller. pic.twitter.com/P0lxzojHuh

37.5 hours in, 1241km done, and she's almost 300km ahead of where the men's record holder was at this point. #thisgirlcan #ridelikeagirl pic.twitter.com/zHgD30SIq0