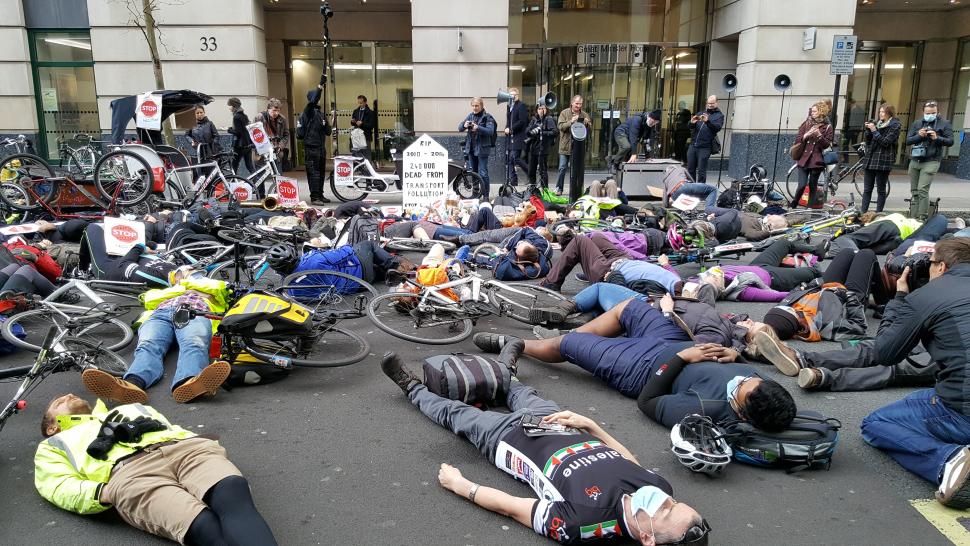 Hundreds of cyclists took to London’s streets this weekend to stage a ‘die-in’ protest following three cyclist deaths in the space of a week.

On a day when another collision resulted in a female cyclist being seriously injured in Brixton, south London, the protesters wheeled their bikes from Parliament to the Treasury to campaign for more funding for safer cycling.

The riders lay on the wet pavement outside the Treasury for a one-minute silence.

Co-founder of campaign group Stop Killing Cyclists Donnachadh McCarthy told the BBC: "We have had enough of the breadcrumbs - we need real spending.

"We have had two tiny superhighways built, but they have been a huge success.

"They are the germs of a revolution which should spread all across London."

Nine cyclists died in London in 2016.

Protesters called for the budget for cycling and walking to be extended to 10% of the annual transport budget.

A number of campaigners also wore gas masks, a reference to the heavily polluted air of the capital and other major British cities.

One sign read: "We are all canaries in London's toxic air."

A Department for Transport spokesman said: "Britain has some of the safest roads in the world but we are committed to reducing the number of cyclists killed and seriously injured."

It added that it would spend "£300m on cycling funding in this Parliament" and more than £7bn improving road surfaces.

Meanwhile, a female cyclist remains seriously injured in hospital after being involved in a crash with a motorcycle in south London.

The female cyclist in her 30s was hit by the motorbike on Brixton Hill yesterday afternoon.

She was taken to a south London hospital.

The motorcyclist - a man in his 40s - suffered minor injuries and said he did not need to go to hospital.

The crash comes after a week of carnage on London's roads in which cyclists Ben Wales and Karla Roman, both 32, and Anita Szucs, 30, died in the space of just four days.

Two pedestrians, a man and a woman who have not been identified, were also killed in seperate crashes in Limehouse and Euston this week.