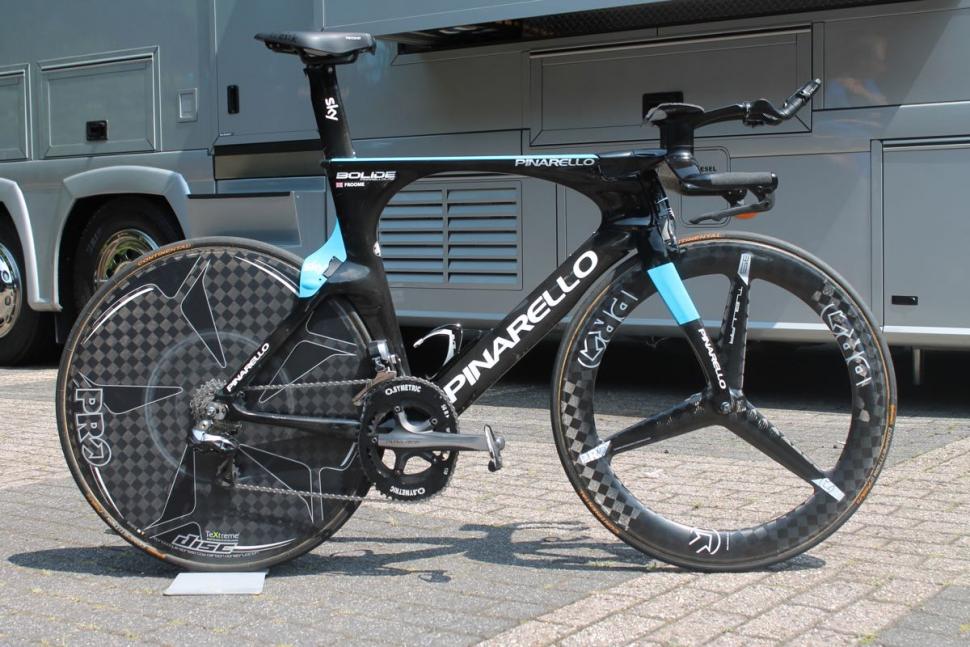 A US television show has claimed that UCI officials prevented French law enforcement officers from removing the rear wheels of time trial bikes used by Team Sky at the 2015 Tour de France to check them for hidden motors.

The claims were made last night in the CBS documentary programme 60 Minutes, which focused on the issue of mechanical doping within professional cycling.

As we reported ahead of the show airing yesterday, CBS had already revealed that former Tour de France champion Greg LeMond had said that he was distrustful of recent results in the race because of the possibility some riders are cheating by using hidden motors.

Yesterday’s programme focused on the Hungarian engineer Istvan Varjas, known as Stefano, who claimed to have sold exclusive 10-year rights to his hidden motor technology to an anonymous buyer in 1998 for $2 million.

It’s the claims that hidden motors are currently being used at the highest levels of the sport, including at the Tour de France, that are most worrying, however.

LeMond and his wife Kathy met Varjas in Paris before the 2014 Tour de France, and the three-time Tour de France winner, who has ridden one of the bikes, told 60 Minutes he is convinced some riders are using them.

“I know the motor’s still in the sport,” LeMond said. “There’s always a few bad apples, and it’s a lot of money.”

The couple had raised their concerns with French investigators, and convinced Varjas to co-operate with the authorities while LeMond was working as a TV pundit on the race.

Varjas told French police that shortly before the 2015 Tour de France, he had supplied an unspecified quantity of bikes with concealed motors to a locked storage unit in Beaulieu-sur-Mer, a seaside village between Nice and Monaco.

The deal was said to have been arranged through an intermediary, and the Hungarian said he did not know who the ultimate client was.

Besides the motor he developed that are hidden inside a frame, Varjas had later designed one that sits inside the hub of a rear wheel, adding around 800 grams of weight compared to a standard version of the wheel.

CBS reporter Bill Whitaker asked the LeMonds: “You could detect it by weight?”

Greg LeMond replied: “Yeah. Cycling weight is everything. Your body, your bike. If your bike weighs a kilo more, you would never race on it.”

The 2015 Tour de France had two stages against the clock – the first on the opening day in the Dutch city of Utrecht, the second the Stage 9 team time trial from Vannes to Plumelec in Brittany.

The 60 Minutes report said that the programme had been told by French authorities that at that year’s race, they had weighed bikes before a time trial stage and that of all the teams, it was Sky’s bikes that weighed the most – fully 800 grams heavier than those of any other team tested.

A report on Stage 9 of the 2015 Tour de France in the Telegraph confirms that Team Sky’s bikes were taken afterwards to be checked for concealed motors, with the riders having to return to the team bus, parked a kilometre downhill from the finish, in the broom wagon.

The report did not say whether they had also been checked prior to the stage, which was won by BMC Racing, with Team Sky finishing 1 second behind to keep Chris Froome in the yellow jersey that he would keep all the way to Paris as he secured the second of his three overall victories in the race.

On the day in question, Team Sky’s Wout Poels had lost contact with his team mates prior to the final climb, where Nicolas Roche would also struggle as he dropped off the back.

A spokesman for Team Sky quoted on 60 Minutes insisted the team had never been involved in what the UCI terms “technological fraud” and added that the governing body had checked the bikes and found no issue with them.

He also said that “during a time-trial stage bikes might be heavier to allow for better aerodynamic performance.”

Whether that is in comparison to other teams, or to bikes used in road stages, is unclear – although when it comes to performance, when racing against the clock, weight is less of a consideration than reducing air drag.

Having said that, with an uphill finish at that team time trial stage – 1.7 kilometres at an average gradient of 6.2 per cent – it’s likely teams would have wanted to have kept the weight of their bikes as low as possible.

Team Sky rode that day on the Pinarello Bolide, and it could also be that the 2015 version of the bike was fairly ‘chunky’ in relative terms – the following year, launching an updated model ahead of the Giro d’Italia, the Italian bike brand claimed to have shaved 350g from the weight.

While 60 Minutes acknowledged that the weight of a bike compared to others was not in itself proof of doping, it claimed that it had been told by sources that UCI officials would not let the French authorities remove the wheels from the Team Sky bikes to weigh them separately to try and discover whether anything was amiss.

At the time of the 2015 Tour de France, despite widespread rumours that hidden motors might be used in the peloton, none had been found in competition.

That changed 12 months ago this week, when one was discovered in a bike used by Belgian Under-23 rider Femke Van den Driessche at the UCI Cyclo-cross World Championships in Zolder, Belgium, and she would later be banned for six years and fined 20,000 Swiss Francs.

Subsequently, the UCI stepped up its efforts and carried out widespread testing using the app it had developed that, linked to a tablet computer, aims to detect electromagnetic waves.

At last year’s Tour de France, those efforts were supplemented by x-ray equipment as well as thermal imaging cameras loaned by the French military.

During the race, Team Sky principal Sir Dave Brailsford insisted his team was not using mechanical assistance and that it would be impossible for one to go undetected given the amount of controls being conducted.

“[Chris Froome’s] bike has been tested more than everyone else’s,” he said. “We get tested every day and we actually had an email from the UCI saying thank you for being the most cooperative team out of everybody when it comes to bike checks and mechanical checking.

He added: “If someone is stupid enough to come here [to the Tour de France] with a motor in their bike, for sure they will get caught.”

However, in October last year, Varjas told Irish radio show Off The Ball that he and Kathy LeMond had seen UCI officials stop French Gendarmes from carrying out checks on bikes. He did not name which teams the bikes were from.

While 60 Minutes did not say it believed Team Sky was using hidden motors, the questions the programme raises come at a difficult time for the British WorldTour outfit, as UK Anti-doping (UKAD) probes whether there was any “wrongdoing” regarding a medical package for Sir Bradley Wiggins delivered to the team at the 2011 Criterium du Dauphiné.

Today, a House of Commons select committee confirmed it had invited former Team Sky doctor Richard Freeman, the recipient of the package, and Simon Cope, the ex-British Cycling employee who flew out with it from the UK to the Alps, to testify before it next month.