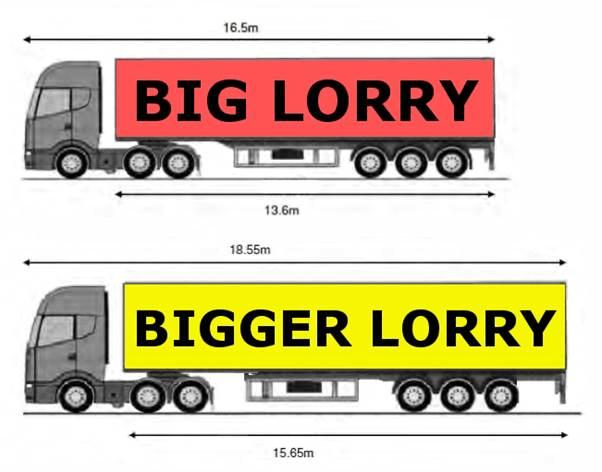 Not enough data on how these lorries operate, say campaign groups
by Sarah Barth

The government is to allow more extra-long lorries onto UK roads, a move campaigners say will be deadly for cyclists.

At 70ft long, the lorries are 15 per cent (7ft) longer than standard HGVs, and are being trialled on our roads.

Cycling groups including LCC, British Cycling and & Cycling UK and road safety groups are opposed to their use, saying that the extra length behind the read axles has a tail swing of double that other HGVs.

These campaigners say cyclists are ill-warned of the additional dangers they should look out for when interacting with these longer lorries.

Philippa Edmunds, from the Campaign for Better Transport, said: “The Government’s decision to allow even more longer lorries onto UK roads is based on incorrect assumptions and flawed research.

“The supposed environmental and safety benefits of longer lorries are partial and not derived from scientific data. The Government does not even know which minor roads the lorries are using and for what distances and should be collecting this data via GPS or telematics before it even considers an extension of the trial.

“By extending this trial by an additional five years we are extremely concerned that the Government is ignoring the very real danger posed by these longer lorries on urban roads, which unlike the strategic road network, are totally unsuitable for these vehicles because the extended rear tail swing is double that of existing HGVs.

“In order to reduce the risks to other road users, especially cyclists and pedestrians, these longer lorries must to be restricted to local authority defined routes immediately.”

According to Campaign for Better Transport, the Government’s claims that longer lorries produce less carbon emission and are safer than standard HGV are unreliable because there is no independent analysis of the safety or fuel efficiency efficiency of longer lorries. The only analysis relies on information submitted by the haulage operators taking part in the trial.

There is currently no data available on which roads are being used by the lorries in the trial or for what distances or for how long. Instead of getting this accurate information using GPS, the DfT is proposing that its consultants will use origin and destination post codes to model likely routes which is no substitute for accurate data.

Because of the lack of manoeuvrability of longer lorries there is a significantly higher risk of them getting stuck or damaging street furniture and buildings. Two operators monitored in the trial using urban roads, still experienced 128 per cent and 177 per cent higher damage incidents per million km using longer lorries than compared to the standard HGVs doing similar trips.

Back in 2013 we reported how the Campaign for Better Transport and the Technical Advisers’ Group appealed to Patrick McLoughlin, the then Transport Secretary, for local authorities to designate specific routes that can be used by the new lorries, protecting vulnerable road users and protect road surfaces and properties on the routes.

The lorries, which can be up to 18.55m long, have also been found to damage street furniture and other parked vehicles on urban roads, due to a greater tail swing and more pronounced driver blind spots.

As well as proving dangerous for those around them, the lorries also force local authorities to spend more money on repairing the damage they cause.

A demonstration of the new longer vehicle at the Department for Transport’s testing facility in Millbrook Bedfordshire showed the rear tail-swing when turning corners was significantly greater than normal HGVs, up to 1.3 m greater under normal road conditions, and would occur within the driver’s blind spot, posing a significant threat to other road users, especially cyclists and pedestrians.