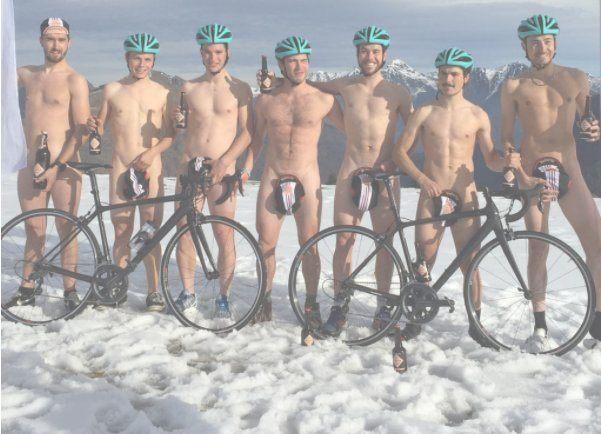 Riders pose naked in snow to raise Euros for kit

Team La Bande are 15 riders from seven French teams hoping to raise €5,000 to fund the next stage in their cycling careers
by Laura Laker

A cycling team has appeared naked in a snowy photoshoot in a bid to attract attention – and funds – for racing.

The 15 members of La Bande, young riders from seven French clubs, are hoping to raise at least €5,000 for kit and to launch the next step in their cycling careers. They have raised more than half of that so far.

Riders say they already have bikes, helmets and motivation, and all ride at National Division 3, a high-level amateur category, but they need funds to train and continue to work with the club.

Their crowdfunding campaign has raised €2,858 since its launch on 4 January. La Bande was formerly Team Payname, which in 2014 won the Le Mans Shimano 24 Cycling race, setting a race record, covering 1,004km; the team hopes to tackle it again this year.

We’re not sure if it’s a January thing, or what, but Greg Van Avermaet has also appeared naked on the front cover of a Dutch TV and radio magazine, which is asking readers to choose the sexiest sportsman – the golden stud of Dutch sport, as they put it. We think it’s genuine.

Are you shitting me
Mah eyes are BLEEDING!!!!!!!!! pic.twitter.com/MHMCjIG6wt