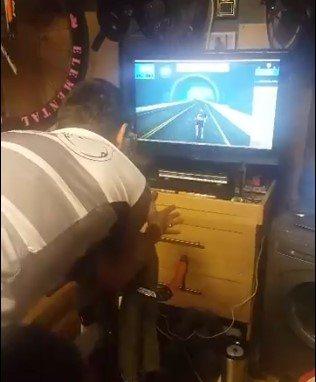 How long can you last on an indoor trainer before boredom gets the better of you? Chris ‘Hoppo’ Hopkinson, the first Briton to officially complete the Race Across America (RAAM) solo, is currently trying to break the Zwift distance record as a fundraiser for Solo RAAM 2017.

Zwift is the indoor training software which allows you to ride your bike online in a virtual world. The current distance record for it is 1,620km and writing ahead of his attempt, the 49-year-old Hopkinson said: “I plan to bury that in one continuous ride!”

The record is held by Derek Boocock who completed the distance in 71 hours 40 minutes, including breaks. The actual ride time was 52 hours 37 minutes meaning an average speed of 30.7km/h. He said his longest sleep was for two hours.

Announcing his attempt, which began on Sunday, Hopkinson said: “The more people I can get riding with me on Zwift the better. If I can get a thousand people over the 3 days and they all buy just 1 mile that will be amazing! Miles are for sale at £5/$7 per mile and 10 miles gets you on the support crew shirt.”

Details of how to donate can be found here.

After 900km, Hopkinson suffered a crash – Zwift, obviously, not his bike. This was quickly resolved and Zwift have said they will resolve issues so that no data is lost.

Not having much luck at the moment, just had a flat tyre I know they say virtual reality but I could do without a flat! Good raam training

A couple of hours ago, he wrote on Facebook: “Been struggling with nausea and sickness for a few hours now. Because of this I have not been able to feed and drink properly making me feel even worse. To stop this vicious circle I am about to take a 2 hour sleep break.”

That break was subsequently shortened to 90 minutes because Hopkinson says longer breaks make it harder to get started again.