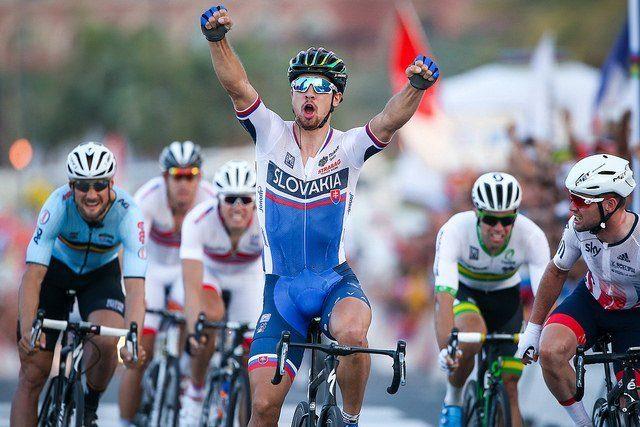 The 26-year-old, who has had a stellar season in which he won a second rainbow jersey, a fifth successive points jersey at the Tour de France and, with the Tour of Flanders, his first Monument, was speaking at the launch of his new Bora-Hansgrohe team.

Sportschau.de put it to the Slovak rider that many in Germany remain sceptical about cycling because of a succession of doping scandals that saw sponsors and broadcasters sever ties with the sport.

Only now, a decade on, are they beginning to return. Both the title sponsors of Sagan’s new outfit, which he joins from the defunct Tinkoff, are German.

“What happened, happened,” Sagan said. “Now there is a new generation. We live like we’re in prison. We always have to indicate our whereabouts. Doping controls can happen anywhere.

“Cycling now is very clean,” he said. “I was lucky and have already come into a clean cycling. The fact many young riders have the chance to win nowadays shows you cannot do these things anymore.”

Asked what he, in rainbow jersey, riding for a German team could do to help promote cycling in the country, he said: “It’s not just about Germany. I’m very happy that Germany is back in cycling.

“Behind us is a period in which either national money was in cycling – as with Astana, or Katusha – or in which bike manufacturers sponsored teams.

“Now, Bora-Hansgrohe demonstrates that things are changing. Companies with money are coming into cycling, because they can market their products well.”

He said his first impressions of his new team, whom he was with on a training camp in Spain, was “very good”, and that his colleagues “are all thrilled to be in the WorldTour now. It’s very professional, and everything runs as it should.”

Given his success to date, Sagan was asked what still motivates him. He replied: “It may look like I’ve won everything, but it’s not like that.

“There are still some races I want to win” – Milan-San Remo, where he has come close on several occasions, is an obvious target, as is Paris-Roubaix – “and others I want to win again.

“That’s why I do this sport. I started at nine years of age and kept going. This is the life I’ve chosen.”

Sagan is the undisputed superstar of the peloton now, also demonstrated by the fact that his bike sponsor at Tinkoff, Specialized, has moved with him. He was asked what he did to ease the pressure of being a star.

“There’s not much time to relax,” he said. “The season’s long, there are a lot of races. That’s why I was happy to spend two weeks without a phone when the season ended.

“But that was enough, then I wanted to get back into it. Those rest periods are important. After the classics, and after the Tour, I take a break, then a third at the end of the season.

“It’s not much, but during this time you have to enjoy life.”

While that includes skiing, snowboarding and – more recently – surfing, real relaxation for Sagan comes by being with those closest to him.

“If I just want to relax, I spend time with my wife and my family, my friends. This is important, too, because otherwise there’s no time for it.”