Cannondale debuted their UK road range this week down on the, er, sunny South Coast. Over the years Cannondale have built up a reputation for engineering innovation and the canny ability to trickle high end winners down the price ranges as fast as possible, top end kit at not such top end prices… should be a winning formula for hard times. Among the 2011 highlights on display were a budget-friendly version of the award winning Super Six (well, relatively) and an all-new CAAD 10 performance aluminium frame pitched squarely against the budget end of the carbon bike market.

That's not all. There's also a new women's version of the Super Six and – back by popular demand – the Synapse aluminium road range, Cannondale's sub-£1000 all day riding bike which was inexplicably dropped from the range last year just at a time when demand for these sorts of bike had never been higher… no wonder Giant sold out of Defys so quickly.

We've got a slew of pics of all the new bikes and we'll be updating this story with more soon… including some of the resurrected Synapse. In the meantime, dig in to this lot… 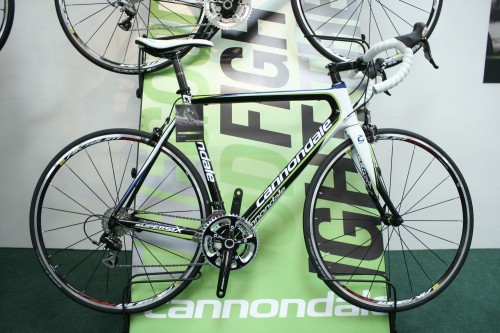 Cannondale really hit the bullseye with their range-topping Super Six road bike. It's cleaned up lots of awards and was piloted to first place in this year's Giro by Ivan Basso. A bike like Ivan's will set you back a serious amount of money – the top of the range Super Six HIMOD Team will leave you with a penny change out of £7K. Ouch! Fear not though, for 2011 Cannondale have come up with a Super Six for the common man… well, the common man with £1799.99 to spend. There's also a new Feminine version too for the er, common woman, more on that in a mo.

How do Cannondale do it you ask? Well, aside from the down specced componentry and wheels, the new entry-level version of the Super Six is made from standard modulus carbon, so a slight trade off in weight and stiffness (Cannondale claim 1050g for the standard frame in a 56 as opposed to 900g for the high modulus version) equals a big saving in manufacturing cost which is reflected in the price.

While the Super Six 105 build kit might lack the glitz of some of its pricier stablemates, it's still good stuff. We've been riding the new 105 gruppo for the last few months and it builds on the group's long-standing reputation for reliability and durability with a dash of higher end zip too. The Super Six comes with a 105 drivetrain with the chainset subbed out for an FSA BB30 compact, with 105 brakes and levers. 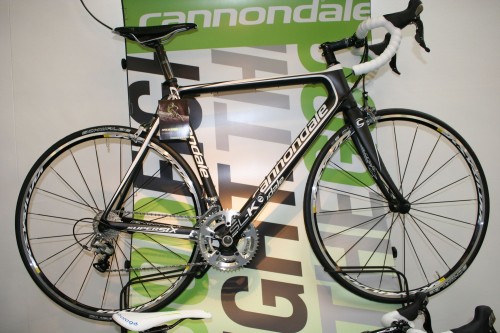 At £1799.99 the Super Six 105 might have the more eye-catching price, but the Ultegra version (£2499.99) looks good value too. Shimano's 6700 Ultegra groupset is probably our favourite drivetrain componentry, much closer in performance to Dura Ace than 105, and the Ultegra Super Six has much lighter wheels too – Mavic's legendary Kysirium Elites as compared to the Mavic Aksiums on the Super Six 105. 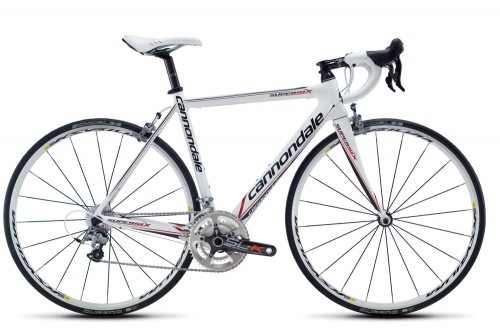 There are also 105 and Ultegra versions of the Super Six in Feminine versions too - that boils down to smaller sizes, starting at 44cm, and an overlap in sizes with the smaller sizes in the men's range. Gone are the days when Cannondale's women's bikes were self-consciously girly, so smaller men also get the benefit of an extra colour option, while women riders get proper performance machines in a greater range of sizes. The Super Six 105 Feminine is the same price as the men's version whiled the Super Six Ultegra Feminine is £100 dearer than it's male counterpart at £2599.99. We're not sure why that is and, to be honest, Cannondale's pricing may not be completely firmed up so if there is no difference in components and finishing kit to account for the difference the price will probably fall back in to line with its male counterpart.

On paper at least the Super Six 105 looks like a winner. £1799 buys you the heart of a great bike built up with more than functional componentry and wheels that can be upgraded as you go along. Yes, there is a slight penalty in terms of weight and stiffness around the bottom bracket but probably nothing most mortal riders are ever going to notice. Or, to put it another way, are most of us going to be good enough to exploit the advantages that the HIMOD frame bestows? Come on, be honest – it could save you a fair stick of cash. 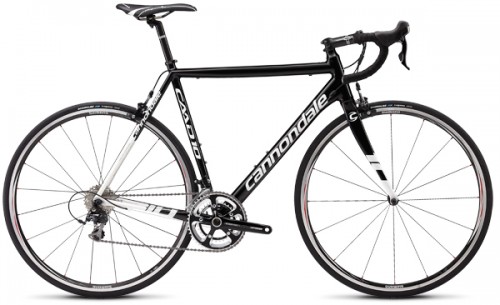 Cannondale are keeping the faith with aluminium as a frame material, introducing a new high-performance CAAD 10 frame for 2011. It doesn’t seem five minutes ago that we were on CAAD 4 (and have you noticed that policemen are getting younger by the day?).

CAAD 9 frames, which are no longer available, were made from 6061-T6 alloy but the new CAAD 10s are 6069. What does that mean? Although it’s harder to weld, this allows Cannondale to use thinner tube walls and drop the weight to 1,540g for the frame and forks (size 56).

As usual with Cannondale, the down tube is colossal while the top tube is a square-edged oval – check out the pics and you’ll see what we mean. The CAAD (Cannondale Advanced Aluminium Design, acronym fans) frames have always been known for their torsional stiffness and we can’t see this incarnation being any different, although we've yet to ride one round the block never mind get some serious miles 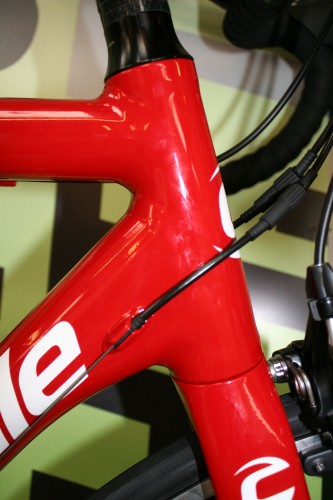 The head tube tapers from 1 1/8in at the top to 1 1/4in at the bottom while the chainstays and seatstays use SAVE (Synapse Active Vibration Elimination) shaping stolen from the Synapse range for extra comfort at the back. Oh, and you get an oversized BB30 bottom bracket too, for more stiffness and a slight weight saving.

There will be three CAAD 10 builds starting with the Shimano 105 equipped model for £1,299.99 in black (although we liked the red paint job on the version at the launch). The next-level-up Ultegra version is £1,899.99 in white and the top-line Dura-Ace build, which comes with Shimano’s RS-Eighty carbon laminate wheels and FSA SL-K cranks, will set you back £2,499.99 and comes in a very stealth anodized black. Cannondale are claiming a complete bike weight of 7.1kg (15.6lb) for that one – which is pretty darn light by anyone’s standards. Whereas Cannondale’s more expensive aluminium road bikes come in the new CAAD 10 design, the sub-£1000 models are CAAD 8. CAAD 9 is no more. It has ceased to be etc (unless it's just resting).

CAAD 8 is largely unchanged from last year in that it has a slightly less aggressive geometry than the CAAD 9 or CAAD 10 – you get a head tube that’s a touch longer and a reach that’s a little shorter for any given size. We’re only talking about small differences, though – 1.5cm on the head tube – it’s still a fast, racy setup.

Cannondale have neatened up the CAAD 8’s rear mudguard mount and lost 60g off the carbon fork, but that’s about all. The CAAD 8 frame weight (size 56) is claimed to be 1,470g. There are three bikes in the range, all Shimano-equipped. The Sora version is £699.99, putting it right in the mix against the likes of the Specialized Allez, Giant Defy, and Trek 1.2, it's amazing to think that not very many years ago that frame was on team bikes and now it's the company's entry level offering. The CAAD8 Tiagra is £849.99, and the 105 model is £999.99, sneaking in just under the £1,000 limit for buying a bike tax free on the Cycle to Work Scheme. It’s almost as if they planned it that way. As well as being cycle to work friendly, the 105 CAAD8 stands out for another reason too being possibly the cheapest bike on the market (along with the Synapse ALU 105) to come with a BB30 bottom bracket… its that trickle down technology again. 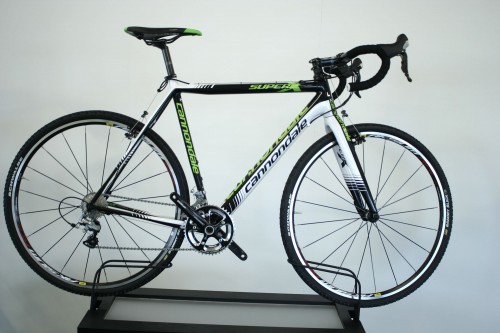 Cannondale have five cyclocross bikes in the lineup for 2011 including one that we think is an absolute bargain as a commuting option.

At the top of the range, Cannondale have gone all carbon fibre with two new high modulus SuperX models. Like the CAAD 10 road bikes, they have tapered (1 1/8in to 1 1/4in) head tubes but no disc mounts. They don’t have SI cranks either, because Cannondale wanted to keep the cost down for more price conscious 'cross riders. The good news, though, is that the frame and fork package weighs in at just 1,400g (3.08lb). 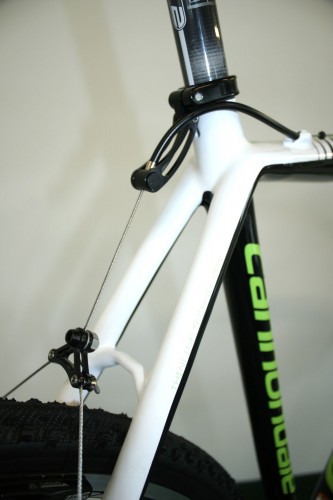 Cannondale reckon the SuperX models ride a lot like their Flash mountain bikes but we’ve not got one anywhere near any mud so couldn’t comment on that. What we can say is that the front end of the bike shares much of the same tubing as the Flash, while a glance at the back shows there's a fair whack of Super Six in its DNA too – check out the tube profiles around the seat tube junction and the rear states. The SRAM Red build will set you back a cool £3,499.99 while the Shimano Ultegra option is £2,399.99. 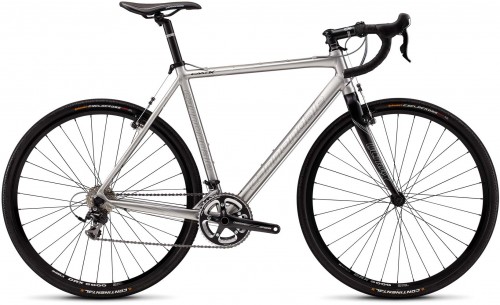 The other cyclocross bikes are alloy, built around the CAADX frame which is an upgrade from last year’s CAAD9. They come with full mudguard and rack mounts, 46/36 chainrings and canti brakes - yes, it's our new best friend – the 'cross bike you can ride to work. We're long time fans of this format (yes we know a tourer would do the same job… but ) and at £999.99 the CAADX 105 model looks like killer value to us – it’s got to be the one to go for, especially if you can get it tax-free on the Cycle to Work Scheme. The other choices are Tiagra (£899.99) and Ultegra (£1,399.99). 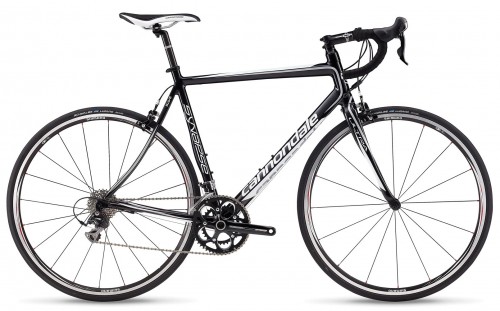 Specialized's Roubaix may have been the game changer when it came to marrying performance to comfort, but Cannondale were early pioneers of the same concept. If memory serves, they actually got their before Spesh with the model that the Synapse replaced… and which I can't remember the name of… (all suggestions gratefully received cos it's driving me nuts trying to remember). Indeed the Synapse itself has been around a good while now, and along with the Roubaix has helped set the template for this type of bike: higher position, more forgiving contact points, plenty of vibration damping from the forks and stays. 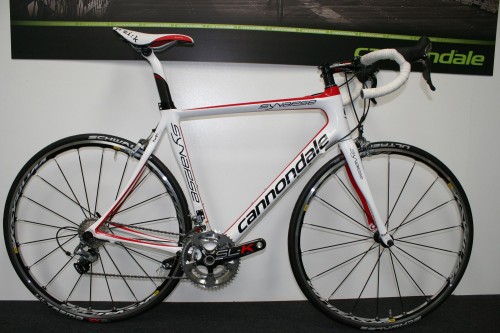 The Synapse range goes right from high modulus carbon models through to aluminium, but last year Cannondale pulled something of a left field move by dropping the alu models except for the Feminine version. This year it's back in Sora, Tiagra and 105 versions which match up in spec and pricing to the CAAD 8 range. All are under the magic £1000 mark making them ideal bikes for those needing a do-it-all machine suited to a longer commute and putting in big weekend miles – and they'll certainly be be competing for the affections of sportive riders along with Giant's Defy range and the Trek Pilot. 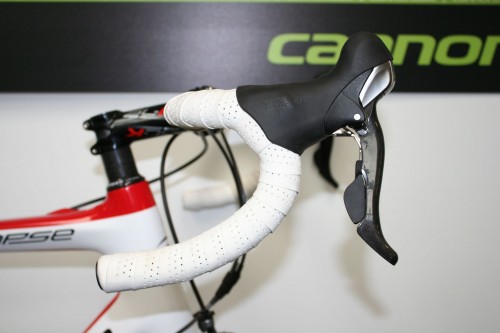 Apart from that more upright position and comfy shallow drop bars, the big deal with the Synapse range is their SAVE chainstays and fork which, say Cannondale, are "organically shaped to act like a micro suspension system without sacrificing the lateral stiffness needed for pedaling efficiency". Top marks for not mentioning vertical compliance. The Synapse is a comfortable bike, but just to make sure it hasn't lost anything while its been away we've already got our name down for a test sample.