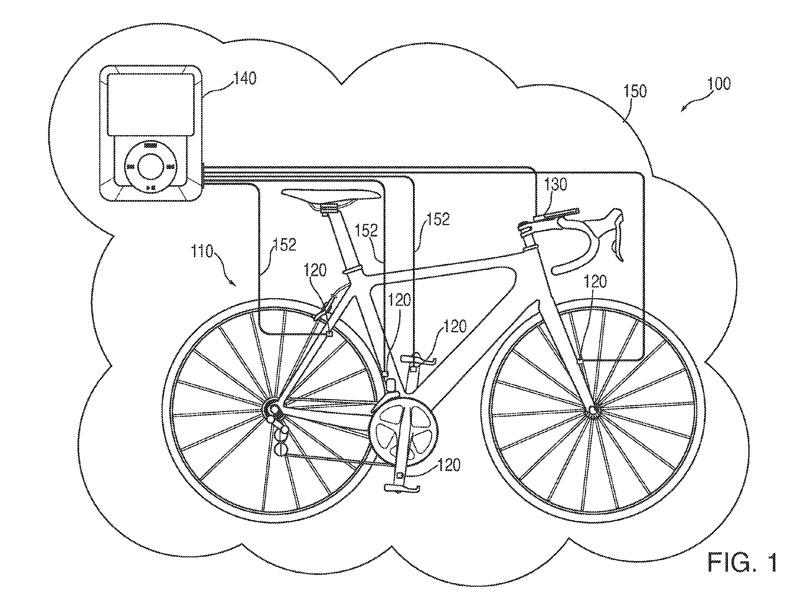 Finally you'll be able to see your speed and... what? Oh...
by dave atkinson

You know how you've been riding around all this time and not been able to find out how far you've been, or how fast you're going? Well that's all set to change thanks to Apple. the US Patent & Trademark Office yesterday published a patent application from Apple covering a range of concepts that they'll be using in a new development, the Smart Bicycle System.

According to Patently Apple the patent, which can be seen in full here, was originally filed in the first quarter of 2009.

"Many bicyclists desire accessing different information as they ride, such as speed, position, heart rate, power or other information related to components of the bicycle", it reads. "To provide such information to the cyclist during the ride, a bicycle computer can be coupled to the bicycle, for example on handlebars".

The basis of the patent seems to be that the Apple system will build on the basic functionality of a bike computer and add the ability to share information in real time with other users. "The electronic device can be associated with a first bicycle, and include control circuitry operative to detect several electronic devices associated with [other] bicycles. The control circuitry can... determine at least one riding characteristic of the first bicycle, and receive, in real-time from each of the detected several electronic devices, at least one riding characteristic of each of the plurality of bicycles.

Got that? Essentially the deal is that the system can be a mobile version of a sport tracking site such as ChampionChip, where you can see your mates on a ride and how they're getting on. The patent goes on to talk about further uses of the system, including real-time communication with other iders, comparison against past performances, riding recommendations and so on. It's pretty thorough.

The worrying part of the patent is further down, when it talks about hardware. The brains of the system could be, according to Apple, "a media player such as an iPod.RTM. available by Apple Inc., of Cupertino, Calif., a cellular telephone, a personal e-mail or messaging device (e.g., a Blackberry.RTM. or a Sidekick.RTM.), an iPhone.RTM. available from Apple Inc., pocket-sized personal computers, personal digital assistants (PDAs), a desktop computer, a laptop computer, a cyclocomputer, a music recorder, a video recorder, a camera, radios, medical equipment, domestic appliances, transportation vehicle instruments, calculators, and any other portable electronic device capable of being carried in the vicinity of bicycle"

So, basically anything. Even a calculator or medical equipment. Which raises some interesting questions. Obviously much of what is written down in the patent is already available to buy in bike stores across the world in the form of bike computers and GPS devices, and presumably Apple won't be attempting to go after them. But there's plenty of smartphone-based apps already on the market, and more in the pipeline, probably all of which will have been developed since this patent application was first filed.

Many, such as the excellent Endomondo go some way to realising the concepts of the Apple patent, and are in constant development with new features being added all the time. The risk is that Apple's wide definition of the controlling device will allow them to challenge developers using non-Apple hardware, which isn't something we want to see. We're all for Apple making a go of this system, but not for them using a patent that's deliberately vague in terms of hardware to try and control the market.