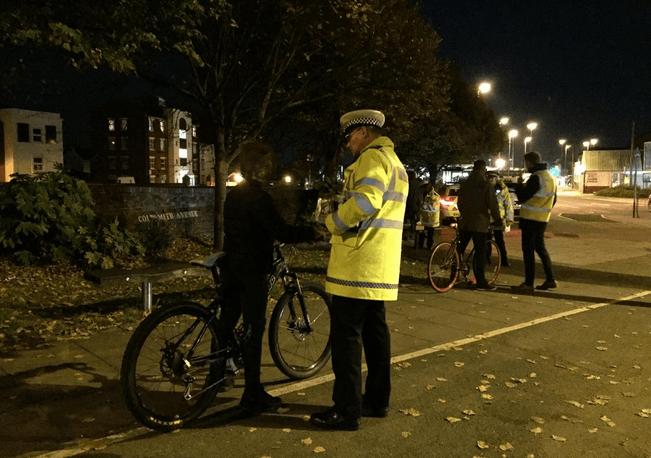 Road traffic officers from Hampshire Police have stopped hundreds of cyclists in the past week in a road safety drive – even though they had done nothing wrong. Earlier this year, the same force told a cyclist it had insufficient resources to take action against a motorist filmed making a close pass on him.

Under its Be Bright Be Seen campaign, Hampshire Police has not only been fining cyclists riding illegally without lights – at least 34 to date – but has also stopped nearly 450 others who were doing nothing wrong to offer them safety advice and distribute high-visibility gear.

According to the Twitter feed of Hampshire Roads Policing, last week in Southampton, 130 riders were stopped, with four fined for having no lights. In Basingstoke, 100 were stopped, with five fined. And in Portsmouth, officers stopped 250 riders, of whom 25 received fines.

We engaged with 250 cyclists in #Portsmouth yesterday, gave out #freebies & issued 25 tickets for riding without lights #BeBrightBeSeen pic.twitter.com/quuSSDwPXR

The initiative was strongly criticised by many on social media, however, with Twitter user @BezTweets highlighting  a letter received by a cyclist from Hampshire Police earlier this year explaining why the force had not taken action on a video of a close pass that he had submitted to them. The footage was shot on Bell Street, Whitchurch, by Mike Stead just after 2pm on the afternoon of 18 January, but following an exchange of telephone calls and correspondence with Hampshire Police, he was told that the force had insufficent resources to investigate such cases unless they met the legal definition of 'dangerous driving,' and that they "had to prioritise incidents which involve injuries or fatalities."

Contrasting his experience with the operation the force has launched in recent days, Mr Stead told road.cc: "My experience is that Hants Police have no budget to take road policing seriously.

“Therefore their idea of making cyclists 'safer' is to get a few cops out on a commuter run for a few hours, get some trite photos snapped, hand out a few FPN's, and job done, box ticked.”

He added that he believes there is “No chance of changing the culture where the driver of 1500kg of steel moving at 30+MPH gives a person on a bike mere inches of 'space'.

“They know they won't be caught, there won't be any investigation, and no consequences.

“Therefore people on bikes will continue to be maimed or killed, while cops hand out tickets to the survivors for trivial, beaten-up 'offences'."

Speaking about its Be Bright Be Seen campaign last week, Sergeant Rob Heard of Hampshire Police said: “During this week we will be speaking to cyclists and other road users about safe riding and driving tips and about sharing the road together for the safety of all.

“Cycling is a great way to keep fit and healthy, however cyclists are one of our vulnerable road users and when they are involved in a collision the injuries can be serious.

“As the light reduces and visibility diminishes it is always good idea for all road users to be bright and as visible as they can.

“Despite the dangers, some cyclists take the risk of riding without lights, which as well as being illegal, increases their risk of being involved in a collision.

He added: "We hope that this week of action will remind both cyclists and motorists that a little extra consideration of each other will make our roads safer for everyone."

The force’s approach is a stark contrast however from that adopted by road traffic police in the West Midlands, who in a widely-praised initiative are targeting and prosecuting motorists making close passes on cyclists, deploying plain clothes officers on bikes as well as using footage shot by cyclists.

When the initiative was launched in September, receiving national media attention, West Midlands Police Road Traffic Unit said in a blog post that since cyclists were not to blame in most collisions that resulted in death or serious injury of a rider, “it would be a waste of our time, and thus public time and money to concentrate on cyclist behaviour. The figures speak for themselves ... drivers don’t let your prejudices get in the way of the truth…”

On the subject of high-visibility clothing, they said: “Don’t think hi viz clothing will keep you seen, although hi viz has a place in some circumstances such as low light conditions, it is contrast that catches the attention of the driver who might pull out on you, that, and movements the human eye and brain are wired to detect.”

Police in the London Borough of Camden and in North Wales have said that they will follow the approach adopted by their colleagues in the West Midlands, with other forces also studying the initiative.