LAWBREAKER: the shocking truth of a road.cc staffer's ride to work

As an employee of top cycling website road.cc, Oli might be expected to set an example behind the handlebars.

And indeed he does. A bad one.

Despite being a vocal campaigner for cycling, the 24-year-old flouts the rules with astonishing regularity.

Watched on his four-mile journey home from his home in Oldfield Park to road.cc towers, Oli committed at least 1,345,661 offences, risking hefty fines. ONE: he CAREERS through a red light, narrowly missing a pedestiran and oblivious to the danger he's putting car drivers in. TWO: he WEAVES through pedestrians on a crossing, this woman is clearly very UPSET by his reckless behaviour.

THREE: he SAILS through another red in town as obedient, tax-paying motorists wait patiently in line. FOUR: he TEARS along the pavement as frail elderly women and fair-haired children jump for cover

He didn't do any of those things, of course.

In picture one Oli went through the standard stop line just as the light was turning amber, and by the time he'd passed the ASL and entered the box to go straight over onto the cycle path, it was red. The woman crossed on a red man, so she gets into the frame.

In picture two Oli is entering from a side road just out of shot, he never went over the crossing at all.

In picture three the light in shot is red, but the light controlling the lane Oli is in is on green filter to let traffic round the corner. That light is out of shot though.

In picture four he's riding along a cycle lane, albeit a badly marked and fairly pointless one. but you can't see that because the cars are in the way.

So is this what happened to Jon Snow? Well, we don't know, not without seeing the sequences of shots that the photographer took. I doubt we'll get that privilege though. If you want to make someone look like a law breaker, though, it's not that hard.

While we were out and about we thought we'd see if we could catch any motorists breaking those rules of the road. We're fairly pleased to report that there was a very low level of mobile phone use on the streets of Bath today. Okay, still some people jabbering away (we didn't manage to get any good shots of them) but much less than the last time we conducted an impromptu straw poll. Maybe it's because it's the summer holidays and there's not as much traffic, maybe the message is getting through. Let's hope it's the latter.

Not everyone was behaving impeccably though. Our favourite transgression was this chap, driving with a dog on his lap. Here's a woman jumping the red on the way into town... 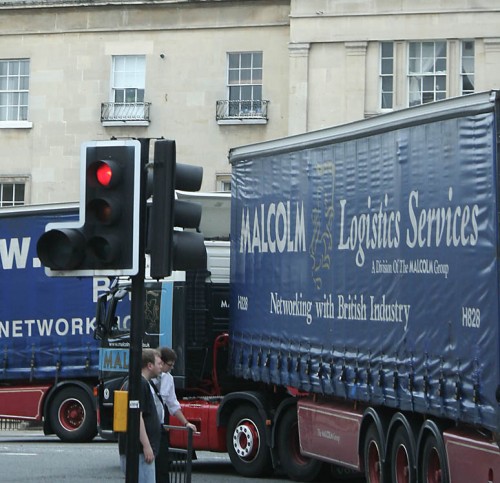 And here's a woman having a quick read at the lights.