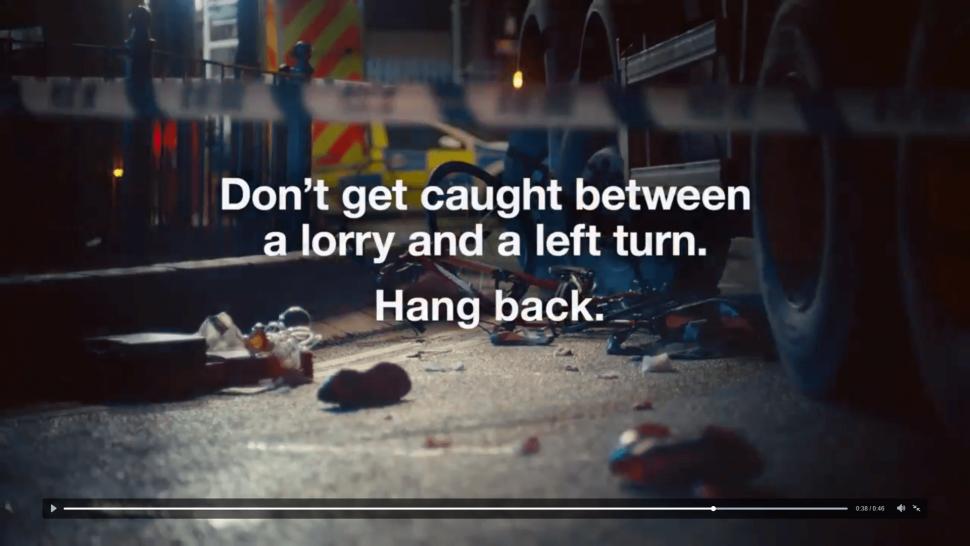 Chris Boardman calls the video, which appears to blame a cyclist for a left turn lorry crash, "desperately misguided"...
by Laura Laker

The Department for Transport’s (DfT) THINK campaign has come under heavy criticism for releasing a video which appears to blame a cyclist for a collision with a left turning lorry.

The clip, which shows a number of colliding forces in slow motion, including a butcher chopping meat and two rams butting each other, interspersed with snippets of a cyclist riding on the inside of a left-turning lorry, begins with the caption “things you shouldn’t get caught between”, and ends with images of a bicycle crushed under HGV wheels.

British Cycling's  Policy advisor, Chris Boardman, has led criticism of the video,  calling it “desperately misguided”, while the Green Party says it makes the government appear clueless over road safety, and the message should be for lorry drivers not to put cyclists at risk. Many have called for its immediate withdrawal.

Cyclists: Don’t get caught between a lorry and a left hand turn. Watch and share our new #THINK! cycle safety ad. pic.twitter.com/AG3hqVeXjN

CTC: Lorries should have higher safety ratings for public projects

After the @ThinkGovUK Twitter account tweeted: "Cyclists: Don’t get caught between a lorry and a left hand turn. Watch and share our new #THINK! cycle safety ad" this morning, Boardman responded, saying: “Desperately misguided campaign that a) tries to make death fun b) vulnerable road user responsible for vehicle not fit for road.

“Companies, THINK buy lorries that let your poor drivers see more than 70% of the road, they exist,” he added.

The video sequence involving the cyclist and lorry in the montage, which ends with a still of a crushed bike under the lorry’s wheels, appears to show the lorry driver overtaking the cyclist before turning left, though it is hard to be sure if this is the case from the edit.

It finishes with the picture of the crushed bike and the caption: “Don’t get caught between a lorry and a left turn. Hang back,” with the sound of sirens in the background.

The Green Party's Transport spokesperson, Caroline Russell AM, says the video indicates a lack of government understanding over cycling safety.

"The government quite clearly shows they have not got the first idea about how to reduce danger for people cycling," she says. "Their film shows an HGV lorry overtake riskily at a junction and turn left in a classic left hook crash. Yet their message is a victim blaming call for the cyclist to stay back.

"I never filter to the left of lorries in stationary or heavy traffic but frequently find I am overtaken by lorries who put me in their blind spot by doing so. The message should have been directed at the lorry drivers to ask them to stay back from people cycling to avoid them being exposed to the risk of causing a crushing collision."

Some cyclists are asking whether a similar campaign is being aimed at lorry drivers, and companies that procure HGVs, to help prevent cyclist fatalities in left turn lorry collisions.

Stop Killing Cyclists has called the video “disgraceful” and asked that it be withdrawn “immediately.”

The video is part of a Think! Campaign which is planned to run until 23rd October, focusing on London and Manchester. West Midlands Police, of the much-hailed decoy cop close pass initiative say it shows what not to do when overtaking a cyclist.

@bellamyonabike @THINKgovuk Let's just say we won't be using it, we might use it to show drivers not what to do though. #S3RTA1988

He said: “Cycling UK raised its concerns with this campaign at the earliest stage and we are very disappointed this was not taken on board. Hopefully, following the understandable widespread negative reaction THINK! has received from road safety campaigners, they will rethink and re-engage to learn from their mistakes.

“The best safety initiative for our roads would be for Government to back the use of direct vision lorries in major building projects, just like the Mayor of London has done. These lorries allow the driver to see more of the road and around their vehicle, and that means they’re safer for cyclists, walkers and other road users.”

A DfT spokesperson told road.cc: “Any death on the road is a tragedy, and all road users have a responsibility to make our roads safer by being more vigilant.

“We want to protect vulnerable road users by raising awareness of specific dangers, and research shows that a large number of road incidents involving cyclists are with lorries at junctions. The THINK! road safety campaign is aimed at cyclists, motorists and HGV drivers, and they all have a role to play in improving safety.”

As cyclist Alex Ingram points out, the Think! campaign released a second clip, ten hours after the first one, showing the cyclist narrowly escaping a left turn collision with the lorry.