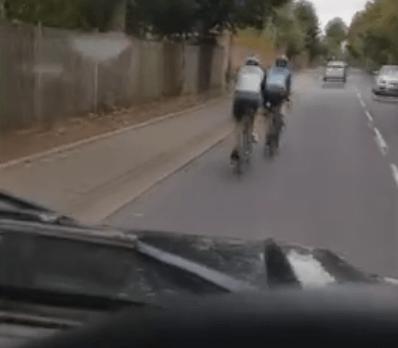 A motorist in Roehampton, south west London branded a group of cyclists who were riding quite legally on the road “Saturday w*nk*rs” for not using a shared-use path – while illegally filming them from a handheld mobile phone while driving.

The driver, Andrew Cudd, posted the video to Facebook but deleted it – and his account – after social media users, some of whom had copied the footage and reposted it, reported it to the Metropolitan Police.

YouTube user Dr Morocho posted a video including the original footage that also shows how the situation escalated via social media.

The motorist gave a running commentary as he passed cyclists using the road rather than the shared-use path, beeping his horn then confronting a group of riders waiting at a traffic light.

The original video, posted to Facebook on Friday, had amassed more than half a million views by the time it was deleted.

In a post on its website, Richmond Cycling Campaign pointed out that besides the illegal use of a handheld phone while at the wheel, Mr Cudd had also passed some of the cyclists too closely.

Both issues have received prominent coverage in the national press last week, with calls to increase penalties for using a handheld device at the wheel and West Midlands Police confirming it will prosecute drivers who carry out close passes.

“We’re asking the Roehampton Safer Neighbourhoods Team to investigate this video, and others have asked Roadsafe to do the same.

“Not only is Mr Cudd wrong in a number of his assertions, but what appear to be a number of close passes, and his clear admission to be using his mobile phone while driving should surely result in some police attention.

“We want the roads in our area to be safe for everyone, however they’re getting around, and whatever they choose to wear – no-one should be exposed to danger or poor road behaviour like this.”

The footage was filmed on Priory Lane, a popular route with cyclists heading to or from Richmond Park via Roehampton Gate, and scene of two other videos that have gone viral in the past 18 months.

In March last year, café owner Jason Wells unleashed a tirade of abuse on a cyclist he believed should be using the cycle path, and was fined for a public order offence as a result of the incident.

In July, the Metropolitan Police were called to an incident on the same road after a motorist was alleged to have deliberately tried to knock cyclists off their bikes, causing two to fall off, and his car’s passengers subsequently becoming involved in an altercation with other riders.