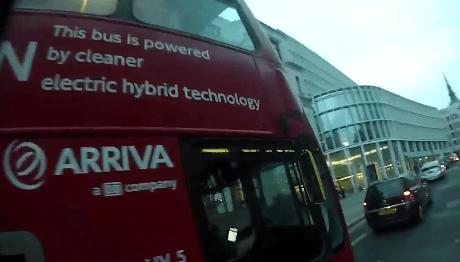 Transport for London (TfL) and bus operator Arriva London are investigating footage posted to Twitter by a cyclist that showed a bus driver apparently using an online betting app on his smartphone while at the wheel of his bus on a busy street in the heart of the capital.

Captured on Ludgate Hill on the evening of Monday 5 September, the video shows the cyclist challenging the driver, who dismisses his concerns, over illegally using a handheld mobile phone while driving.

“Are you placing your bets while driving a bus?” he asks the driver.

“So you’re betting, and driving a bus with passengers? You’re out of your mind!”

When the driver protests that he’s doing nothing wrong, he’s challenged again: “You’re betting on football and driving your bus – are you out of your mind?”

With the bus driver continuing to insist that there’s nothing wrong with him using his phone at the wheel, the person recording replies: “Every time I cycle my life is in danger because of drivers like you.”

TfL said via its Bus Alerts Twitter feed that it would investigate.

@diogo_pit Many thanks, we'll try and identify the driver asap!

Arriva London, the operator of the bus, is also looking into the incident.

@Diogo_pit Thank you for bringing this our attention. An investigation is underway and the appropriate action will be taken.

TfL figures cited by Tom Kearney on his Safer Oxford Street blog in July show that in 2015/16, London buses were involved in more than 27,000 collisions, 580 of those involving pedestrians and 258 in which a cyclist was involved.

Mr Kearney himself was left in a coma after being hit by a bus on Oxford Street shortly before Christmas 2009, and is now a highly active road safety campaigner.