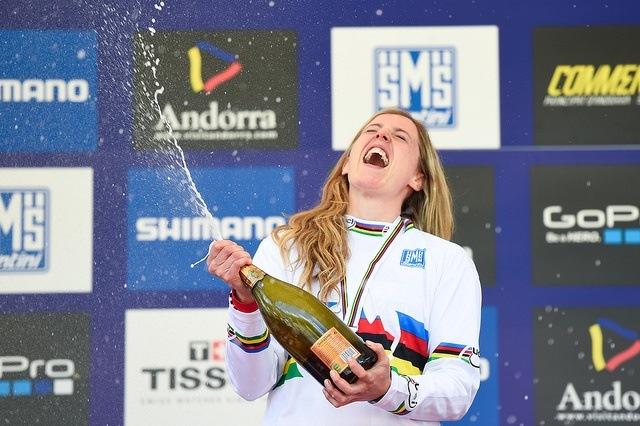 Unbeaten World Cup run stretches to 13 races now ahead of this week's World Championships...
by Simon_MacMichael

Rachel Atherton has become the first rider to complete a "a perfect season" in the UCI Mountain Bike Downhill World Cup Downhill, winning in Andorra this weekend to complete a clean sweep of all seven rounds in 2016.

Her victory at Vallnord on Saturday was also her 13th successive win in the competition, her unbeaten run stretching back to the opening round of 2015’s World Cup when she finished second to Emmeline Ragot in Lourdes.

Atherton’s win also brought her the overall title for the fourth time in five seasons and continues Great Britain’s domination of the event, with Manon Carpenter – winner in 2014 – runner-up for the second season in a row.

British riders have triumphed for six years in a row now, a run started by Tracy Mosely in 2011, who had previously one in 2006, while the first of the 28-year-old Atherton’s first titles came in 2008.

What just happened??!!!! I cannot believe that I have had "a perfect season"!! Winning every World Cup in 2016 with a win today is nuts!

Here’s highlights of the run with which the Trek Factory Racing rider completed her unprecedented World Cup season.

By taking the World Cup title for the fifth time, she equals the record jointly held by the French riders Anne-Caroline Chausson and Sabrina Jonnier.

Great Britain and France have dominated the competition for almost two decades now – since Chausson’s first overall victory in 1998, no other country has produced a winner of the season-long series.

Indeed, in the past 15 seasons, only Switzerland’s Marielle Sainer, third in 2004, and Australia’s Tracey Hannah, third in 2007 and again this season, have made the podium.

This week Atherton will aim for her fourth rainbow jersey at Val di Sole in Italy, where she won her first title in 2008, but the defending world champion still has to counter claims that much of her success is due to the influence of older brothers Gee, himself a double world champion in downhill.

Last month, Dirtmountainbike.com reported that she had taken the Red Bull TV commentary team to task after Rob Warner asked Claudio Caluori, “What makes her so good, is there one thing?” and received the response, “Well, we always say she rides with her brother, who’s one of the leading men in the field, so that certainly helps.”

Why not say the truth?? Because I work DAMN hard!! I train damn hard with my coach, my mechanics and I work on my bike setup and suspension like there’s no tomorrow, I focus on every aspect of racing, I analyse & doubt myself, my experience with injuries has taught me my limits & my abilities, I live for racing, it makes my heart beat!! YES I do ride with my brothers a lot, but I also ride ALOT on my own , and it kind of takes the piss when all you say is “because she rides with her brother” I am, along with all the other women, athletes in our own right, bike riders because WE have the SKILLS, not because we blindly follow the boys with our eyes closed. So Sort it out please boys!!!