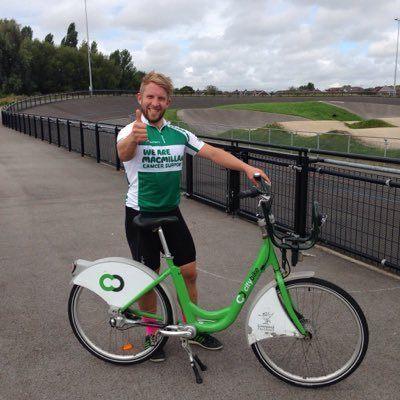 Harry Mytton with CityBike (via Twitter).jpg

A cyclist from Chester claims to have set a new public hire bike hour record. Harry Mytton rode one of Liverpool’s Citybikes 32.72km at the Knowsley Velodrome on Sunday, raising over £1,000 for Macmillan Cancer Support.

Mytton was keen to see whether he could do better and The Liverpool Echo reports that despite strong winds and a brief downpour, he was successful.

Mytton was riding in memory of his best friend’s father, Sean Walsh, who died of colon cancer. Writing on his JustGiving page, he explained:

“Nick is the first of our close mates to lose a parent and there is only so much gin you can drink to grieve.

“So, inspired by Bradley Wiggins et al, I have decided to have a bash at the hour record – the farthest distance you can cycle around a velodrome in one hour. This is my way of supporting Nick and hopefully raising some awareness and dosh for cancer.

“However, riding round a track for an hour on a conventional bike doesn't do it for me – inspired by Rob Holden's record on a London Boris bike, I have decided to do the northern equivalent on one of the 19kg Liverpool Citybikes around Knowsley Velodrome.”

He told the Echo: “Sean’s death really affected the family. Sean was only 56 when he died and he had three kids. For them to lose their dad at such a young age, it was just a real shock. I wanted to do this world record attempt to show Nick how much I cared for him as a mate.”

After receiving congratulations from CityBike via Twitter, Mytton thanked them and said there was also talk of a Citybike omnium.