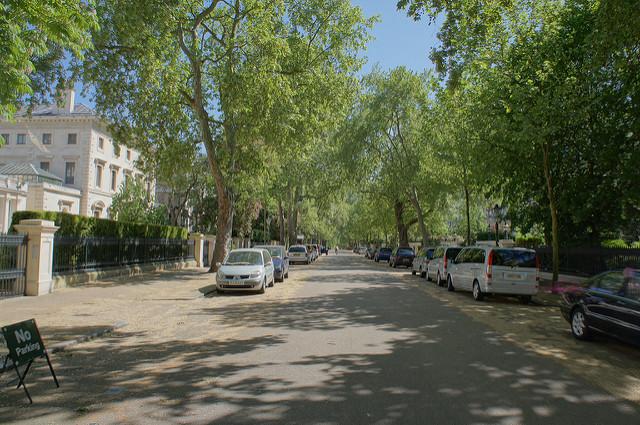 Whisper it quietly, though ... it's perfectly legal to cycle through Kensington Palace Gardens...
by Simon_MacMichael

A planned Quietway through one of London’s most exclusive streets is to be scrapped after locals complained – although cyclists will still be able to ride through it, as they can at present.

Kensington Palace Gardens, gated at either end, runs north to south from Bayswater Road to Kensington High Street and is home to the Russian and Israeli embassies, among others, as well as the Duke and Duchess of Cambridge and oligarch Roman Abramovich.

Instead of passing through the private road, the route, which runs from Earls Court to Wormwood Scrubs, will have a gap of half a mile on the Crown Estates-owned road, reports the London Evening Standard.

According to a report from City of Westminster Council, a number of objections were raised. “Many of these were based on the premise that the private road would be designated as being part of the Quietway, while others feared that more cyclists would use the private road,” it said.

“A number of responses raised concerns that the proposals would be detrimental to the tranquillity of the road.

“This concern seems to be related to a view that the numbers of bikes on the road would increase quite substantially.”

Transport for London said that as a private road, neither it nor the local authority could designate Kensington Palace Gardens as a Quietway.

Meanwhile, London Cycling Campaign said that there would be “a big hole in the middle” of the route, meaning that people might ride their bikes on more congested roads, or avoid the route altogether.

In practice, though, the road will not be off-limits to cyclists, who can access it round the clock, unlike rat-running drivers – so we’d expect that through the power of word of mouth, it will become a de facto Quietway, even if it isn’t signed as such.