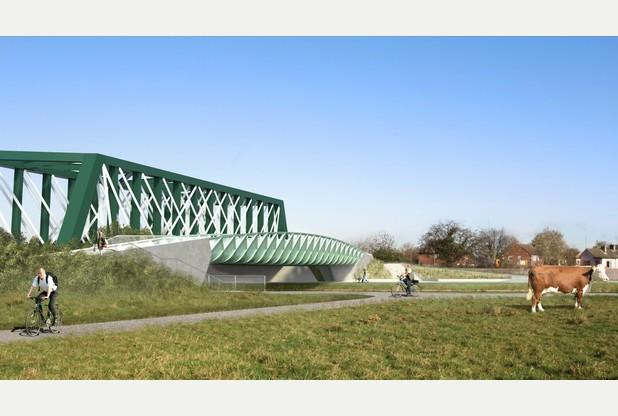 Chisholm trail will open up sustainable routes to work for hundreds, developers say
by Sarah Barth

A new vital bridge linking the Chisholm Trail for cyclists and walkers over the River Cam will be used by more than 6,000 people a day, according to a planning application.

The £4.5 million bridge will be coordinated with a landmark new cycle route, connecting pedestrians and cyclists in the east of the city to destinations in the north, such as the Science Park and the new Cambridge North railway station.

“In summary the estimated total number of daily trips for all journey purposes on the Chesterton Bridge is approximately 3,800," says the forecast by transport consultants Atkins.

“There is also the potential for further use of the bridge from leisure and education users as well as during particular event days, such as those at the Abbey Stadium."

The developers have chosen 'Cambridge blue' for the bridge’s paintwork, saying it is recessive in the natural environment and ‘nods to the cultural and sporting context of the river and city more widely’.

It will be lit at night, with soft downward lighting so as not to cause light pollution.

Back in November we reported how the route was first proposed by Cambridge Cycling Campaign member, Jim Chisholm, in 1998. Jim Chisholm said: “It is very humbling that the route now seems to bear my name. I'm sure that, once complete, many will be regularly cycling or walking part of the route.”

Robin Heydon, Chairman of the Cambridge Cycling Campaign, said: “With this route, cycling from Cambridge Business Park to a specialist unit on Clifton Road, for a relaxing walk on Ditton Meadows, or to visit an event at the Leper Chapel would all be possible within a lunch hour.”

The route provides many benefits and has support from a broad range of local businesses.

The two links under Mill Road by the railway bridge will make cycling and walking in the area more pleasant as well as reducing delays on Mill Road as cycles and pedestrians will not need to cross the road.

A new foot and cycle bridge over the Cam adjacent to the existing railway bridge will provide access to jobs and services in the Science Park area from places like Abbey and Teversham, and access to jobs at the airport and beyond to people living in the northern villages.

The route should also provide a new underpass beneath Newmarket Road, enabling access to the Leper chapel, one of Cambridge’s hidden gems.

In addition, the route will reduce the number of cars on the radial routes thus speeding up bus and car trips, reducing pollution and easing congestion.

However both the Friends of the Coldhams Common and the Friends of Ditton Meadows have raised concerns about the Trail's threat to the conservation of the areas.

Supporters of the campaign argue that the route will reduce the number of cars on the radial routes thus speeding up bus and car trips, reducing pollution and easing congestion.