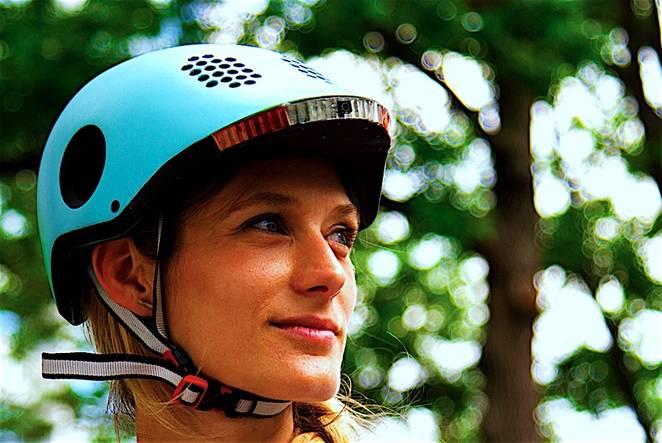 A helmet that contains body movement-activated indicators and brake lights, as well as front and rear cameras, has been dubbed the 'world's most intelligent helmet' and is nearing its Kickstarter goal after only two days of crowdfunding.

The Classens helmet, from New York-based designers Brooklyness, is closing in on its $30,000 goal for funding on crowdfunding website Kickstarter, having begun its funding run on June 22.

The helmet itself contains a myriad of technical details to keep cyclists safe on the road; and what's more, they're all intuitive and easy to use - which we know from experience is a rarity in projects like this. 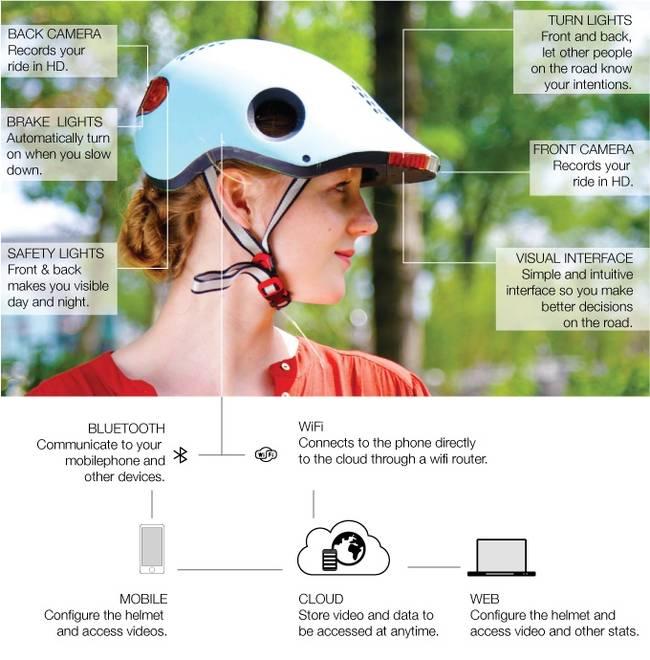 The most obvious features of the Classens helmet are the lights on the front and back of the helmet. These are the momentum-activated brake lights and the movement activated indicators.

As you'll be able to see in the company's Kickstarter video below, the lights work in fantastically intuitive ways. The brake lights use an accelerometer and are activated when a rider's momentum shifts under braking. The indicators on either side of the brake light use gesture sensors to activate the lights when you use the Highway Code recommended indication motion.

While the lights do a fantastic job of making other road users aware of your intentions and movements, the cameras do an excellent job of keeping you alert to the behaviour of other road users.

The rear camera monitors the movements of vehicles behind you. When a vehicle overtakes you a little LED lights up on side which the vehicle is passing.

Those same LED lights can be used to direct you to your destination. An app on your smartphone communicates with the helmet and uses the lights to point you iin the right direction.

The front camera is used to automatically record your ride, and can be used to resolve on-road altercations. You can even live stream directly from your helmet, should you feel the need to show people your journey to work.

Be careful though, your boss might think it's a great idea and all of a sudden those excuses you use to cover your extended lie-ins will no longer wash.

The Classens even features two large holes on either side of the helmet which allow you to lock your lid up with your bike, should you have a large enough U-lock.

Manuel Saez, co-founder of Brooklyness - the design company behind the Classens helmet - told magazine Fast Company that the design agency's aim was to create a "magical" helmet that was easy and intuitive to use.

"We tried hard to make [the helmet] as close as possible to what people are used to," Saez said. "There is no learning curve—the idea is to get it on and ride and as you ride doing the same things you normally do. It is in many ways magical. In a way we used design to humanize technology so it is there when you need it and it disappears when you don't."

While usability was a key aim in their design process, Saez was quick to point out that they didn't let the design process get in the way of the main functionality of a helmet; to protect the rider.

"We focus on safety and made sure technology helps and is not hazardous," he said. "We focus on simplifying the UI so the time to understand the information is short and it can be used by anyone."

This isn't the first smart do-it-all helmet cycling companion we've seen here at road.cc. Back in 2014 an Australian designer tried to push this helmet licence plate crossover into the discussion surrounding registering cyclists like cars.

Unsurprisingly, his clunky design that featured indicators, a licence plate, and, bizarrely, windscreen wipers, didn't get much traction in the market.

The early response to the Classens helmet suggests this story will have an entirely different ending.