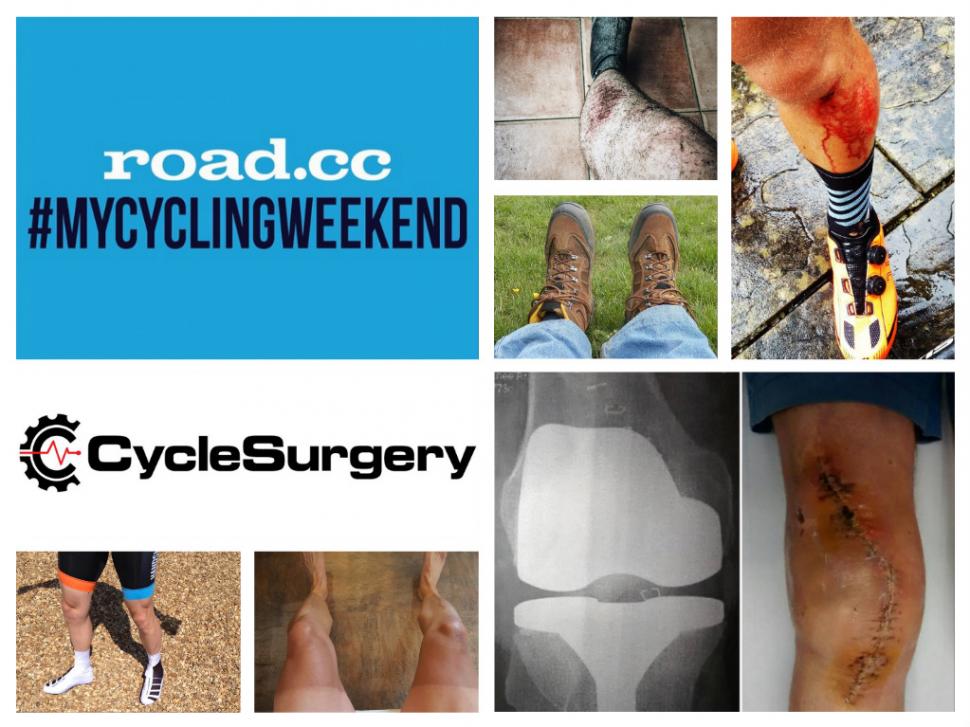 We saw lycra clad juggernauts, some pretty bashed up limbs, legs in jeans, & more this weekend + another Cycle Surgery winner!
by Elliot Johnston

Legs are awesome! Not only do they put up with us standing on them all day everyday, they also endure endless punishment with very little complaint when we decide to climb into the saddle. To honour your lovely limbs, this weekend Cycle Surgery's are rewarding you and your legs.

This week's prize is a Specialized bottle cage and an Orbea bottle from the folks at Cycle Surgery, and all you had to do to win was show us your legs.

What is evident from the photos we saw this weekend is that they don't half see some punishment, our legs.

What quickly became clear was that it's when our legs are injured that we truly realise how much we love them, and how important they are to everything we love - especially cycling.

Getting things started today are a couple of posts of riders who injured their legs and quickly realised how much they really love them.

John Grenfell starts things off with a photo of the aftermath of a slippery #mycyclingweekend ride, and a video of the incident itself.

Following the crash John said he spent the rest of the weekend prepping for the GP, and noting that his shoes and socks need a little Cycle Surgery... ah ha!

We hope the trip to the GP went well, John, and that your clothing is the only thing that needs to go under the knife.

For the complete package of photo, correct hashtags, and video footage of the incident itself, you're this week's #mycyclingweekend winner.

Chain gang in the rain, seemed like a good idea at the time. Will spend the rest of #mycyclingweekend prepping for #bristolgp I think my shoes, socks, gloves and bib shorts need a bit of #cyclesurgery #spiuk #ticcc #TrowVegasCC #legshot https://youtu.be/OXNQ3GnRHX0

Away from John Grenfell's unfortunate end to his #mycyclingweekend we saw a few other bumps and bruises - and a pretty hefty bout of surgery - some winter tan* lines in summer, some super muscley race-ready pegs, and more.

Instagram user balbardie had a pretty happy #mycyclingweekend. He was back in the saddle with his new knee working quite nicely - we've asked him to tell us more about his knee surgery below - so keep an eye out.

Brand new knee and back in the saddle. #CycleSurgery #mycyclingweekend

The weather in parts was pretty unsummery this #mycyclingweekend, but it didn't stop a number of you who showed off your anti-tan lines, also known as road spray, to us.

The weather wasn't awful everywhere, and there were a few of you taking advantage of that. The age-old phrase 'sun's out, guns out' springs to mind.

There's nothing wrong with that, though, hell a few of us here at road.cc are avid leg shavers and love a chance to get our guns out.

Over in Spain, though, Instagram user excusasypupas took that even further. We don't blame him, if we lived by a beach like that, we'd probably be way more naked.

Pulling out the guns #mycyclingweekend @XBionicUK @roadcc taking them to the dirt at Xperience Cup Italy pic.twitter.com/wAjlnm4qyT

Finally, Wolf Simpson was our sole representative from the non-lycra brigade, of which we know there are plenty of you knocking about.

We hope you had a good weekend's ride, Wolf!

@roadcc but you'll never will see my bare legs when cycling... #mycyclingweekend pic.twitter.com/6cXuWi8lwq

Always love a smash-fest down Torhole Bottom! Even in the pissing rain. Fancy joining a TCG ride? 7:30am every Sunday from the Conygre hall, Timsbury. Its all free! #mycyclingweekend #cyclesurgery #torholebottom #timsbury #radstock #smashfest @jeflemon

Nippers out for a bit of a ride. 6.5 miles - furthest they've ever done. #mycyclingweekend #frogbike

Remember, all you've got to do to get involved is snap a photo of you out riding, and send it to us via Instagram or Twitter, by simply attaching the #mycyclingweekend and the #CycleSurgery hashtags onto your posts!