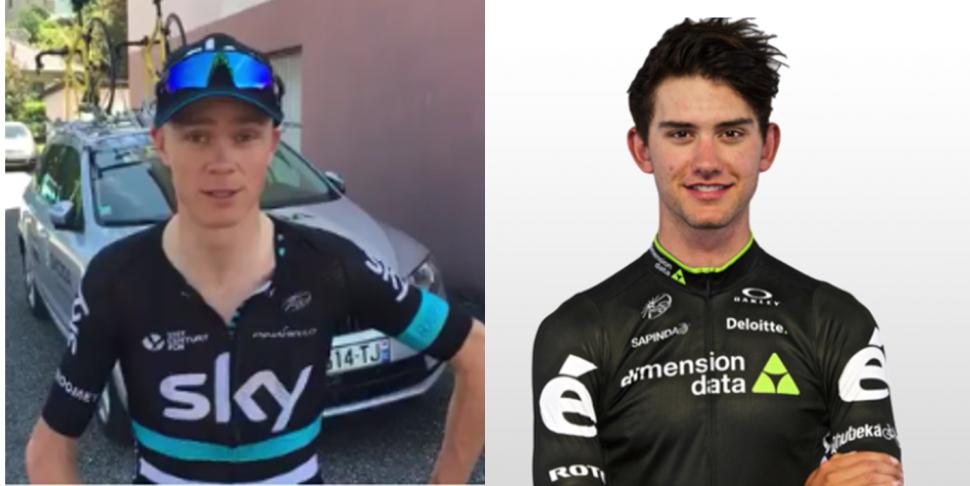 British cycling champion Chris Froome has added his words of encouragement to the well wishes have been flooding in for Dimension Data U23 rider Keagan Girdlestone who is currently in an induced coma.

We reported last week that Girdlestone was in a critical condition following a downhill collision with a team car which saw him crash through the car's rear windscreen in Sunday's Coppa della Pace in Italy.

Initial reports on social media seemed to indicate that Girdlestone had lost his life, however his family quelled those fears via a Facebook post later that night informing everyone that the 19-year old was in a critical but stable condition.

Girdlestone grew up in the South African city of Durban, but the 19-year old moved to Christchurch, New Zealand with his family five years ago. His parents Desere and Wayne Girdlestone traveled from Christchurch to Italy on Tuesday to be by their son's side, and have been publishing updates about his condition to Facebook and Twitter.

The shocking nature of the accident, and the complicated neurological issues the young rider is currently battling with have also prompted well wishes from many corners of the pro peloton. Most notably from high profile riders like fellow Dimension Data rider Edvald Boasson Hagen and of course Chris Froome.

The Team Sky rider sent the following video message to Girdlestone's family, which was then published by his mother Desere Girdlestone on Twitter on Friday.

Awesome of @chrisfroome to send me this message for @Keagan_vtc He'll be thrilled once he sees this Thanks Chris! pic.twitter.com/15JUcRJq0E

According to Girdlestone's brother Dylan - who's currently in hospital recovering from his own injuries sustained from a cycling crash - the Dimension Data rider appeared to be more responsive.

He tweeted: "Sounds like my bro @Keagan_vtc is doing better today. Much more responsive and aware of what's going on. Eyes open. #keepfightingkeagz"

However, on Saturday he told his Twitter followers that Girdlestone's condition had worsened on Friday and he had been in an induced coma all day. He concluded that tweet by writing "He is not totally out of the woods yet, his injuries are complicated."

Edvald Bossen Hagan, who is a member of the same team as Girdlestone, won Thursday's fourth stage of the Criterium du Dauphiné - a race Chris Froome is currently leading - and used that platform as a chance to publicly wish Girdlestone a speedy recovery.

He said: "It's nice to get a win for Dimension Data for Qhubeka and it gives me an opportunity to send my best wishes to Keagan Girdlestone for his recovery."

Girdlestone's mother has been keen to express how hopeful she is about his recovery, even in the face of setbacks, like's Friday's coma induction.

She told South African news network TMG Digital: “He’s a fighter‚ he has to win the biggest challenge of his life now."

We send all of our well wishes here at road.cc to both Keagan and his family members in what must be an incredibly testing period for them all.