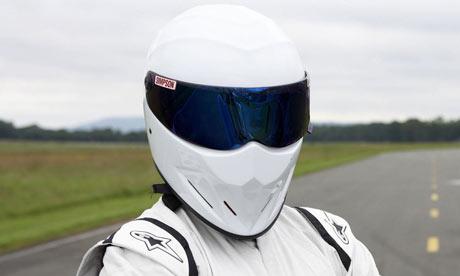 Some say he's seen the light - but would ex-host Jeremy Clarkson approve?...
by Simon_MacMichael

You may have noticed that BBC motoring show Top Gear is back on TV - minus, of course, petrolhead-in-chief Jeremy Clarkson and sidekicks James May and Richard Hammond. The Stig is still there, though - and yesterday, he was spotted being filmed riding a cargo bike, of all things, in central London.

Sunday's premiere of the new series, co-presented by new hosts Chris Evans and Matt LeBlanc, got a bit of a panning on social media, with the hashtag #FlopGear trending, as well as in the media.

So the sight of him pedalling his way through Paddington may give further cause for dismay among die-hard fans of the show.

But with cycling set to overtake private car use in the capital in the coming years, according to Transport for London, perhaps we shouldn't be too surprised at the besuited and behelmeted man of mystery giving a cargo bike a try?

And who knows, perhaps the dear departed Clarkson himself may approve?

When he was sacked by the BBC, reporters doorstepping his west London home were surprised to see him turn up there on a bicycle.

> Jeremy Clarkson on his bike - in every sense

Earlier, in 2012, writing in the Sunday Times, he said he would move to the Danish capital Copenhagen "in a heartbeat" after seeing first-hand how prioritising people on bikes over motor traffic made it a much more pleasant city to live in than ones that don't.

As for The Stig, it's not the first time Top Gear producers have made him forgo petrol powered machines when travelling in the capital.

In 2007, armed with a Travelcard, he travelled by public transport as he took part in a race across the city from Kew to London City Airport, while Clarkson piloted a speedboat down the Thames, May drove a car, and Hammond rode a bike.