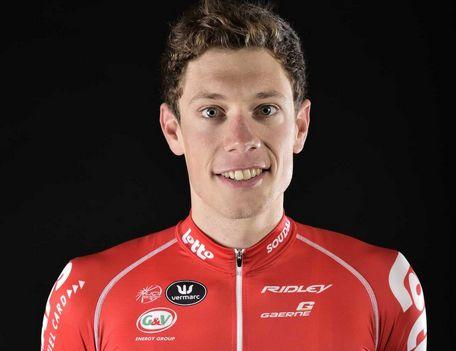 Lotto-Soudal rider Stig Broeckx is in a coma tonight following a crash at the Tour of Belgium that involved two motorbikes that were following the race and which brought down a number of riders.

Five of the 19 riders who crashed in the incident were taken to hospital, with the 26 year old the most seriously injured of them. He is now in hospital in Aachen, across the German border.

The stage was neutralised after the crash, which comes two months after Wanty-Gobert rider Antoine Demoitié died of injuries sustained when he was hit by a motorbike during Gent-Wevelgem one-day race.

Team doctor Servaas Bingé said: “It was immediately clear that Stig had incurred a head injury and that he needed to be transported to a neurosurgical centre.

“Together with the race doctor and the medical emergency team we decided to transport him to the hospital of Aachen, which has the necessary infrastructure.

“A scan was taken at the hospital and it showed that Stig has two bleedings in his brain. Stig is in a non-induced coma, but for the moment he doesn’t need to undergo surgery.

“He doesn’t have a skull fracture, but he does have a fractured eye socket, which will be further evaluated later.

“At this point, it is very difficult to give a prognosis about a full recovery. The next 24 hours he will be very closely monitored,” he added.

In March, Broeckx was involved in another incident with a race motorbike at the one-day race Kuurne-Brussels-Kuurne

> Video: Peloton safety in spotlight as moto takes out rider

Lotto Soudal team manager Marc Sergeant said: “Of course we are very shaken by all that has happened today.

Last year our team had very difficult moments after the accident of Kris Boeckmans, exactly three months ago Stig was already hit by a motorbike in Kuurne, and a few weeks later the peloton had to cope with the death of Antoine Demoitié.

“This is very hard for all staff members and riders, but even more for the family and friends of Stig. We can only hope that there is a positive evolution in the condition of Stig and we will support him and his family the best we can, both medically and emotionally.”

The team’s management and riders have decided they will not take part in tomorrow’s final stage of the race, and Sergeant added: “At the moment it is pointless to make any accusations, but it should have been obvious much longer that structural measures concerning the safety of the riders are necessary.”

It is not clear what function the motorbikes involved in the crash were playing in the race.

While much of the discussion of such incidents centres around TV and photographers' motorbikes, it should be noted that the one involved in Broeck's crash at Kuurne-Brussels-Kuurne was providing medical support to the race, while the one in the crash that led to Demoitié's death was carrying a commissaire.

In a statement, the UCI said that it “has recently introduced strict new rules governing the conduct of motorcycle riders in races and we will be looking very closely at what happened today to determine whether those rules were respected."